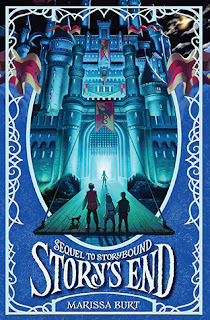 Long ago, a King ruled the land of Story....

During his reign, Heroes, Villains, and characters of all kinds lived out Tales filled with daring quests and epic struggles. Then the King disappeared, and over the years nearly everyone forgot that he had ever existed.

Now an evil Enemy has emerged, determined to write a new future for Story. And an ordinary girl from our world named Una Fairchild must find a way to defeat him.

Una and her friends Indy and Peter set off on a quest for answers, facing warlocks, beasts, and enchantments at every turn. But Una soon discovers that the real key lies in her own mysterious ties to Story’s past—and to the long-forgotten King who may be their only hope for survival.

I loved the first book of this MG series; Storybound. It was beautiful and exciting and unique. And I cannot wait for this sequel! :D It sounds awesome. But, I am worried about a small thing. But hopefully it will all work out. :) It better ;p Also. I adore the cover. It is perfect. :)
What are you waiting for?
Posted by Carina Olsen at 8:49 AM