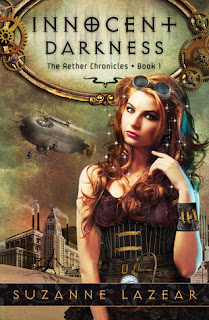 What first drew me to this book was the cover. It is a beautiful cover. But it is also a bit deceiving. The airship makes sense, because in the beginning the main character is flying a small one. Which she then crashes. Which was kind of awesome ;p And the goggles and machinery also makes sense; because the main character likes fixing and working on things. But the dress. The dress doesn't fit in at all. Because no one in this book would ever wear it. Not the main character. So that sucks a bit. But I still love it :)

At first I wasn't sure how to feel about this book. Wasn't sure if I liked it or not. Then I read some more. And suddenly I couldn't stop reading. I started to love it a whole lot. I do like the writing. Which is good. And I did love the world this book is set in a whole lot. It is Steampunk, but it is also Fantasy. It's sort of set in 1901. But it is different from that time, as well. With the whole flying cars and such. I liked it, though. :) What I didn't like where how the girls and women were treated by everyone. Really hated that time period. And I didn't like Noli's mother much. Sure, she loved her, but still. She was a bit stupid and not very nice.

I did love Noli. The main character. Most of the book is from her point of view, but this book is sort of from three different point of views. I did enjoy Noli. She is awesome. Different from every other girl in this time period, and that made her special. I loved her feelings for her best friend; V aka Steven. It was innocent, and so sweet. Didn't like the whole never telling him thing :p But the times were different back then in this book. Noli is fun, though. And kind. And sweet. Really did like her.

And V, I really loved him. He seems like such a dork at first, but I did love that about him. Although he seem to change a bit by the middle of the book. Uhm, only in looks though :) I loved his brain. He is smart, but not too smart. He is adorable. Kind and loving and protective. I really liked him and Noli together. Plus, I loved his family. Well, I hated his father. But his brother, James, was awesome :) Also disliked his mother, when we got to meet her. She was a total bitch. To be honest. Just so you know ;)

Something awful happens in the beginning of this book. Noli and V crash a flying air-car? she made. Getting them sort of arrested as well. And shaming her mother. To avoid going to prison, she's being sent to a boarding school in another city. Which is really a reform place. (Which I do not know what is..) But still. It is such an awful and horrible and disgusting place. I really hate reading about it. It hurts a lot. But I also love it, because it was well done, and it is unique and kind of exciting.

It was called Findlay House. And Miss Gregory was the ruler of it. And omg. She was so awful. This really was a torture place. It is for young ladies who are "out of control." They aren't allowed to leave or have visitors until they have proven themself as a real lady. And to get them to become that.. oh. It was awful. But also kind of awesome. In a twisted way. There is whipping. And almost drowning. Kind of exciting things that also kind of hurt. It was so cruel. Then there was this character..

Dr. Martin. He was the doctor there. A perverse freak. I hated him. Luckily we didn't get to read about him doing anything. But it was implied that something happened to some other girls. And it was awful. Agh. Good thing about the "school." We got to meet Charlotte. She becomes close friends with Noli, and I really liked her. She was so kind and sweet. Even after everything that had happened to her by her uncle. Which was so damn horrible I didn't like it at all. But so well done. Needed to be there.

Noli is at this place for over two months. Too long, to me. Won't say how she gets away from there, cause I kind of liked that part. Maybe. V hasn't been looking for her, because he knows she's there. And he thinks it's just a school, because her mom keeps getting these reports about her progress. But he is worried about her. Worried that something might be wrong. And I did love that a whole lot. Plus, there is something special about V. And I loved that part so so so much. <3 So glad for it :)

When Noli gets away from there she suddenly ends up in the Otherworld. Fairyland. At first I was so sure it would be kind of like the Iron Fey books. But it isn't anything like those. And I'm glad for that. Made me able to enjoy both books :) There is faeries in this book. And I did like how they were done. They are different, but also kind of awesome. Except for Kevighn. My god, how I hated him. And Noli ends up living with him for some weeks. Goddamn it. Not happy about it at all. You'll see.

You all know how much I DESPISE love triangles. It is the one thing I cannot stand. And I am so disappointed that this book has one. Damn it. Giving it four stars because of that. Because I didn't like it one bit. It isn't really a full love triangle. Because Kevighn does trick Noli to kiss him and almost sleep with him. Gets her drunk. But still. Noli is attracted to him. And seems to really like him. Damn her. This book would have been perfect without that. It really would have been. Sigh. Do not approve.

Cause, you see, Kevighn is a big asshole. He lies and lies and is so bad. Some might even like him. *Puke.* But I do not. A lot of this book is from his point of view, and in every chapter almost he sleeps with a new whore. Made me hate him even more. And hate Noli for having feelings for him at all. Will be so displeased if there is more of the triangle in a sequel. Please not. I do not want it at all. Pretty please? Noli and V is so perfect together. Please let them stay together. I hope so much.

Also, Kevighn is a faery. He is the huntsman in this world. He has been tasked with finding a human girl with the Spark every seven years to use as a sacrifice, so that the world of faery doesn't die. He has chosen Noli for that. But Noli resists it a lot. And I won't spoil it. But it is pretty awesome. Anyway. While I hated the "romance" between Kevighn and Noli, I adored the REAL romance between Noli and V :) Because that is real romance. Best friends. Lovers. It was perfect and sweet.

And really, V is the perfect character. Not sure if I should call him V or Steven. Noli calls himV. And I do like that. What I didn't like was that Noli and V does a bit of fighting in this book. But it wasn't so bad. I could deal with it :) Anyway. The plot in this book is really great. Won't say more about it. Because I think you should read it yourself :) What I didn't like much, though, was the ending. Well, a little before the ending. It was a total shock, and it worries me. I am worried for the future.

But I also have hope. And I did like the last few pages. I just hope it will all be sorted out in the sequel. And I want no more triangle. Please. And I need more of V :) Also, there are some sexy scenes in this book. Nothing much, but some small things that I really enjoyed. Glad they were there :) Anyway. Innocent Darkness was an amazing book. It has action, romance, mystery and excitement. I really did like it. And I think you should read it too :) Cannot wait for the sequel. <3 Is it out soon?

Goodreads - Buy it
Posted by Carina Olsen at 6:39 PM