UPDATE: Giveaway is closed! And I have chosen a winner :) The winner is: Christina K. Congrats!

I'm so pleased to be a part of this blog tour. Because I adored Monstrous Beauty, and I want you all to read it :) Today I have a guest post with the author; Elizabeth Fama. And it is awesome. So be sure to check it out ;) I also have an US/Canada giveaway at the end, offered by Macmillan Children's Publishing. So be sure to enter that :) My review of Monstrous Beauty can be found here. I also adore Elizabeth, and I am so thrilled by this guest post :D Thank you so much, Elizabeth. <3

First let me say how happy I am to have Carina Books host this leg of my blog tour. My stops have been so much fun because the bloggers have suggested such interesting topics. Today Carina has asked me to talk about each of the characters, and what inspired them.

One of the most fascinating things about writing a novel is the way characters become a blend of what you intended and what you didn't. You try your best to create them, but it turns out they also have a hand in their design. They slowly reveal things about themselves as you work with them.

I've written an entire post on how I created Syrenka over at Birth of a New Witch. But even knowing what I wanted from Syrenka as a character, she surprised me. She is a thousand years old, but I was taken aback to find how innocent she still was about some things--for instance, how the discovery of books and sleeping could delight her. I knew that she had a history of standing up fearlessly to Noo'kas, but she was able to be gently attentive to a little girl, Adeline, when they first met. It made me think that she would have been a good mother. She showed me on more than one occasion that she wasn't just mimicking human behavior, she was learning it in her core.

I don't think I'll embarrass myself in this company when I say that Ezra is partly based on Howl in the Miyazaki version of Howl's Moving Castle - but without all the drama about his hair. I wanted Ezra to be more sensitive to others than Howl is for most of the movie, in addition to being brilliant and talented. I knew he would be something of a science nerd, and devoted to his dad. What surprised me when writing about him was how uncompromising he was about women! He demanded a smart partner of me. There is a now-cut scene in the novel in which a lovely--but snobbish and superficial--young woman from the town tried to ingratiate herself with him, and he was so completely uninterested in her flirtation, I suddenly understood his taste in women perfectly. The strength of his devotion also surprised me, and what he was willing to do for love.

Two of my young-adult children have decided that Hester is a combination of my oldest daughter and...Ellen Page? Hmm, not quite. I do agree that Hester is cool and analytic with an undercurrent of genuine passion, which might be a fair description of my daughter. But over the course of her adventure, Hester grew to remind me more and more of Ripley in the movie Alien. As one reviewer said, "She puts her big girl pants on and gets the job done." I love that about Hester. I love every single no-nonsense, this-is-what-matters bone in her body. As hard as she seems on the surface, she's willing to sacrifice so much for the people she loves, which is to me the deepest sort of kindness. 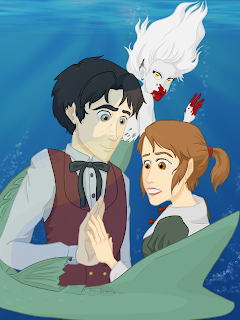 My younger daughter's excellent interpretation of the characters. It was a birthday gift to me in March, and my first fan art!

Peter was the generic best friend when I started the manuscript. I didn't know he'd also be something of a naturalist, like Ezra. I planned that he would be smart and kind. But slowly he started showing me that through his support of Hester, he has held her together all these years. He is her rock (hence his name). She would have veered into being a hermit without him, which was her tendency. I love the moment when he sees the sea snail's body inside the shell and puts it back in the water. To me, that's Peter through and through. Finally, I've never thought of Peter as the third point in a love triangle, primarily because of his own attitude: he knows Hester better than anyone, and he decided a long time ago to give her the space she wanted. If she were to change her mind on her own, though...well, he'd be okay with that.

The most important thing to me when creating Linnie was to make her, well, missing something. I wanted you to see her character clearly, but also feel uncomfortable about her. I wanted your maternal instinct to kick in--for you to feel that she's somehow lost, and that you need to call the museum guard and find her parents.

Pastor McKee's voice is David Tennant's forty-odd years from now, I knew that right away. But the pastor's actual character may have surprised me the most. I wanted to fashion him as kind and slightly misguided. But that alone would have been somewhat flat. I love how self-deprecating he turned out to be, how patient, how crass, how colorful, and joyful. All those things were a bonus that rolled off his own tongue from the moment he announced his full name, Michael Morangie McKee. (His name also has meaning: he holds the "key" to Hester's mystery.)

To me, the setting is almost like another character. If you want to see photographs of the town to get to know it, you should read my blog post about Plymouth and Plimoth Plantation at The Midnight Garden! 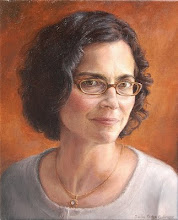 Elizabeth Fama is part of the Fall 2012 Fierce Reads campaign and she will be going on a multi-city and multi-author tour in September. Details here: https://www.facebook.com/FierceReads/events
Check out the Fall Fierce Reads trailer: http://www.youtube.com/watch?v=iiSWgzz9dJU
A chapter excerpt of Monstrous Beauty can be read on the Fierce Reads Fan Page: https://apps.facebook.com/fiercereads/Exclusives
You should also check out her short story; Men Who Wish To Drown:
http://www.tor.com/stories/2012/08/men-who-wish-to-drown
Download the free Fall 2012 Fierce Reads chapter sampler here: http://us.macmillan.com/fiercereadsfall2012chaptersampler/GenniferAlbin
Monstrous Beauty Blog Tour Schedule 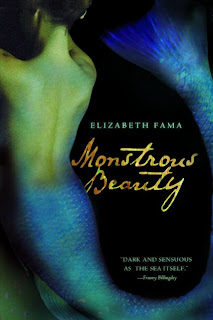 Buy your own copy of Monstrous Beauty:
Book Depository - Amazon - Barnes and Noble
Posted by Carina Olsen at 6:00 AM