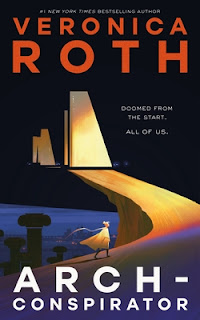 From dystopian visionary and bestselling phenomenon Veronica Roth comes a razor-sharp reimagining of Antigone. In Arch-Conspirator, Roth reaches back to the root of legend and delivers a world of tomorrow both timeless and unexpected.

Outside the last city on Earth, the planet is a wasteland. Without the Archive, where the genes of the dead are stored, humanity will end.

Passing into the Archive should be cause for celebration, but Antigone’s parents were murdered, leaving her father’s throne vacant. As her militant uncle Kreon rises to claim it, all Antigone feels is rage. When he welcomes her and her siblings into his mansion, Antigone sees it for what it really is: a gilded cage, where she is a captive as well as a guest.

But her uncle will soon learn that no cage is unbreakable. And neither is he.

I honestly have no idea what this book is about. I feel confused about the summary above, haha. Buuut. I'm still getting this book :D As I will get anything by Veronica, and I am excited to give this book a try :)
What are you waiting for on this timeless Wednesday?

Posted by Carina Olsen at 6:00 AM No comments:

Whoops. This past week went by even faster than I thought it would. I wanted to read a new book, but have not had the time for it at all. Ack. I have just been busy and exhausted. Sigh. But hoping to start my next book very shortly, as I do know what I'm reading next :) I did get a bunch of mail this week, oops. <3 But DHL have lost one of my funko packages. Uuugh. They better find it on Monday. I'm a little stressed about it, but hoping they find it. Sigh. And waiting on more lovely books :) And more pop figures, oops. I'm too excited. I'm just exhausted lately. Everything hurts and everything sucks. But doing okay. I'm happy :) Just hurting. And hoping my health will get better soon. This week I'm waiting on Sword Catcher :D I hope you are all doing well. <3 Are you reading anything good lately? :) I want some recommendations, ha :) 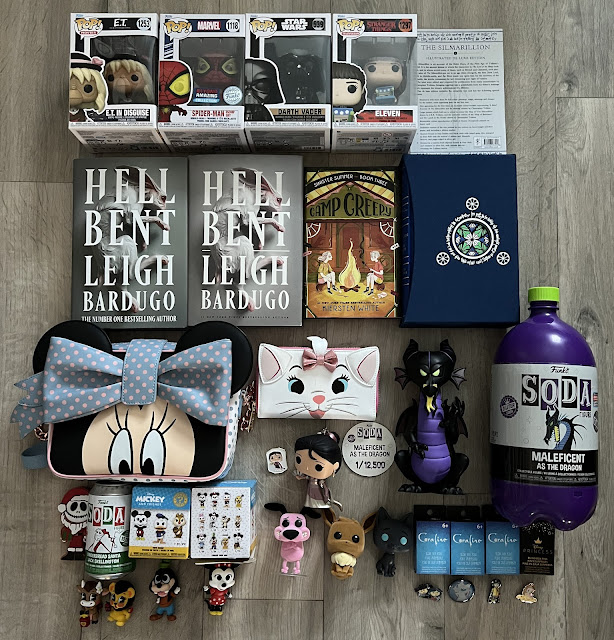 Funko Nordic Pop Figures. Eee! Thank you so much Funko Nordic for this most amazing gift. <3 Love!
Hell Bent. Two editions have arrived; US and UK hardcovers. <3 Hoping to read book one soon, ack :)
Sinister Summer 3: Camp Creepy. I.. have not yet read book one and two. Oops. But I have them all :)
The Silmarillion. This was expensive. But I saw it on sale in my town. I had to get it, oops. So pretty. <3
Funko Europe. Ahh. Two orders have arrived. Waiting on two more. I went a little bit crazy. Oops. I got a new purse and wallet :D And they are just adorable. Love my Maleficent soda. Love my Coraline pins. Some new mystery minis, finally got a new villain version :D And the Goofy is new too, so yay for that :) 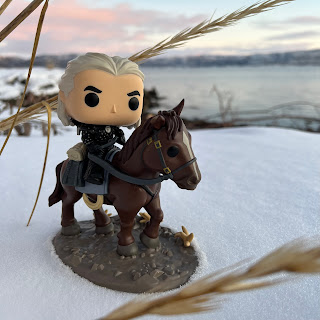 Posted by Carina Olsen at 11:40 PM No comments:

Email ThisBlogThis!Share to TwitterShare to FacebookShare to Pinterest
Labels: In My Mailbox 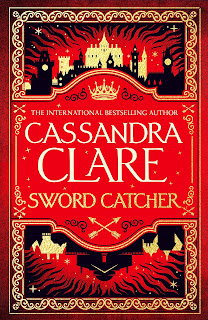 Two outcasts find themselves at the center of world-altering change in the start of a riveting epic fantasy series from the #1 New York Times bestselling author of The Shadowhunter Chronicles.

In the vibrant city-state of Castellane, the richest of nobles and the most debauched of criminals have one thing in common: the constant search for wealth, power, and the next hedonistic thrill.

Kel is an orphan, stolen from the life he knew to become the Sword-Catcher—the body-double of a royal heir, Prince Conor Aurelian. He has been raised alongside the prince, trained in every aspect of combat and statecraft. He and Conor are close as brothers, but Kel knows he has one destiny: to die for Conor. No other future is possible.

Lin Caster is one of the Ashkar, a small community who still possess magical abilities. By law, they must live behind walls in the city, but Lin, a physician, ventures out to tend to the sick and dying of Castellane. Despite her skills, she cannot heal her best friend Mariam without access to forbidden knowledge.

After a failed assassination attempt brings Lin and Kel together, they are drawn into the web of the mysterious Ragpicker King, the criminal ruler of Castellane’s underworld. He offers them each what they want most; but as they descend into his world of intrigue and shadow, they discover a conspiracy of corruption that reaches from the darkest gutters of Castellane to the highest tower of its palaces. As long-kept secrets begin to unravel, they must ask themselves: Is knowledge worth the price of betrayal? Can forbidden love bring down a kingdom? And will Lin and Kel’s discoveries plunge their nation into war—and the world into chaos?

Eeee! I am so very excited about this new Cassandra Clare book :D I.. am so many books behind right now on her stories. Sigh. But I will be reading this one later this year, ha ;) Since it has nothing to do with her other books. Though I will read all of them someday soonish too, hopefully. Not that far behind. But yeah. This one sounds exciting and complicated and different and I cannot wait :D Love the cover too. <3
What are you waiting for on this mysterious Wednesday?

Posted by Carina Olsen at 6:00 AM No comments:

Eee. I have read two books this week :D What even! Haha. I'm proud of myself :) And I'm even thinking about reading again soon. Not sure what's happening to me, lol. But so so happy to finally feel a little like reading again :) Been too long since I have wanted to read. So yay for that. But my next book must have some romance, so I'm not sure what to read next. Oh. Also. No mail this week. Aw. So only sharing my instagram photo below :) But getting looots of mail next week. Oops. And oh. The sun is finally back. At last. Some daylight again, ha. Excited to get to take prettier photos, finally. <3 For once, I have more than one new blog post to share about, ha :D I have three. This week I'm waiting on It Found Us :) I shared my review of Gallant. <3 And I shared my review of The Last to Vanish :) Oh. And yeah. My health goddamn sucks, so I'm even more surprised that I managed to read two books this week, with all the pain I am in. So, yeah. I'm awesome, ha :) This week was medicine week. Which suuucked. And I twisted my neck or something that same day, and have had intense neck and shoulder and back and head pain for daaays now. How rude. Keep waiting for it to get better, but so far not. Hmph. But despite this, I'm doing okay :) Also just so happy that the sun is coming back again now, at last, haha. Hope you are all well too. <3 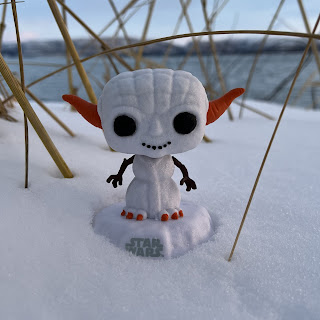 Posted by Carina Olsen at 10:10 PM No comments:

Email ThisBlogThis!Share to TwitterShare to FacebookShare to Pinterest
Labels: In My Mailbox

Review: The Last to Vanish by Megan Miranda 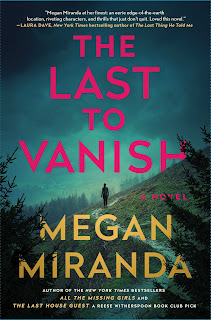 It will not be easy to find the words to write about this book. Will start by saying that I had high hopes for it, as I have very much enjoyed books by Megan Miranda before, having read all but one of her books. But I did not love her latest one. And this one was sadly the same. I so wanted to love it. But it was just impossible.

I have ended up with giving this book two stars. I thought about three. But it was honestly not worthy of that. The mystery was excellent, but it was too little. Pretty much this entire book was boring. And nothing happened. I kept waiting for it to be exciting. It never really happened. A little at the ending. Was not enough.

I did also have some issues with the writing, sadly. I could not get truly into this book. I did not really connect with the main girl at all. I sort of liked reading about her, but I did not care. It was honestly so very boring. It was just her thinking almost the entire book. About the same things over and over again. I wanted so much from this one. I wanted a most exciting mystery book, like many of her other ones. But this one fell short. At least for me. There were some surprises, which I liked. And I liked finally knowing what the mystery was. But it was also a little too easy, I think. I wasn't as satisfied as I wanted to be, with the answers. Also wanted more at the ending. Oh. And there was zero romance. Disappointed about that. It could have made it better.

I am not going to write too much about this book. As I do not really feel like sharing all that much. And there is not much to share either, to be honest. It is a story about Abby, in her late twenties, I think. She has now lived in this very small town for ten years, working at the inn at the mountains. Always being an outsider, as the people who lived in this town always stuck together. She is finally feeling more like she belongs as well. I kind of liked this story about her, but I also did not love her. I so wanted to feel more.

Oh. Yes. There is a secret revealed about her at the end of the book. If this had been known from the beginning, if it had been used better, I most likely would have cared about her much more. But it was not. It was more like it was all an afterthought, just added at the end to shock a little. As it was not used at all before then. Rude. So, yeah. I wanted to like Abigail, but I just did not care. I cared a little more about her friend, Georgia. But only a little. Somewhat liked Cory, but not really. Trey was just there, not interesting.

I suppose this is a mystery book. Four people went missing on a trail twenty-five years ago. Another ten years ago. Then two more a little after as well. The last one just four months before. And now his brother showed up, trying to figure out what happened to him. Which is how Abby starts looking into it all. But my gosh. This book was so very boring. It took ages before something happened. Before she started figuring out anything at all. And the things didn't even make much sense either. The reason for the murders. Ugh.

Honestly, I'm just disappointed about The Last to Vanish. I had thought it would be much better. But it ended up being so disappointing for me, sadly. So much of the book is about Abby being at work at the inn. It was boring. Only a tiny mountain walking, which I liked, but it was so little. I somewhat liked the answers we got at the end, but also not. And so, truly, this book wasn't worth it for me. And I wonder if others will enjoy it, though. And I will still read any new book by Megan. I do think this cover is gorgeous.

Posted by Carina Olsen at 12:12 PM No comments: