I'm so happy to be a part of this tour! Been about a year since I read the first book; Ashfall. And I loved it. Then I was lucky enough to get to read Ashen Winter this April via NetGalley, and I loved it even more, I think! Cannot wait for it to be out. Because I'm pretty sure you'll all love it. My review for Ashen Winter can be found here. My part of this blog tour is an interview I had with the author Mike Mullin. And I love it! Hope you do too :) Thank you so much, Mike!

Question 1:
What is your favorite books to read? Like, do you enjoy reading Young Adult (like you write,) or do you enjoy adult books more? (Personally I prefer YA books. So far. :))

Me, too! I read more Young Adult books than any other type. Outside of that I read a wide variety of genres. I put everything I read on Goodreads—if you like, you can become my friend on Goodreads here. Last year I read 171 books, and here’s how they break down by genre:

Question 2:
Where did you find your inspiration for Ashfall and Ashen Winter? In other books, on the tv, in newspapers etc.
The idea for Ashfall started with another book—Bill Bryson’s A Short History of Nearly Everything. I found it on a display at Central Library in downtown Indianapolis. Dozens of novel ideas lurk within its pages, but the one that stuck with me was the idea of a supervolcano eruption at Yellowstone. A few weeks after I read it, I woke at 3:30 am with a scene occupying my head so completely I was afraid it would start spilling out my nostrils and ears. I typed 5,500 words, finishing just before dawn. Then I put the project away and let it gestate for eight months. When I returned to it after researching volcanoes and volcanic ash, I realized the inspired scene I wrote in the middle of the night wouldn’t work, and ultimately that whole section had to be scrapped. The only word that remains from that draft? Ashfall.

As I outlined ASHFALL, I realized that I had a lot more story than would fit in one book. Right then I did a rough outline for a trilogy, so I’ve known from the beginning most of what would happen in ASHEN WINTER and book 3. The scene around page 180 of ASHEN WINTER that probably made you scream, for example? That’s been in my head for almost three years now. And now I get to share it with you. Mwahahaha.

Question 3:
Who is your favorite character in Ashfall? (Most fun to write.)
Alex. Internally, he’s modeled on me as a teen. Externally, he’s modeled on Ben Alexander, a teen I met at my taekwondo dojang. He serves as the outlet for a lot of my own beliefs and personality. As a teenager, I was a mess—responsible but impulsive, kind but sometimes violent—and Alex shares that confused jumble of conflicting impulses.
I also really love writing Darla—particularly her sassy moments. She’s a strange amalgam of my wife and brother. I admire her toughness, determination, and practicality—hopefully that comes through as your read about her.

Question 4:
Then who is your least favorite character to write?

I made the mistake of basing many of the characters in ASHFALL and ASHEN WINTER on real people. Uncle Paul, Aunt Caroling, Max, and Anna are my brother’s real-life family, for example. They’re an amazing family—tight knit and loving. But in fiction, you have to have conflict to keep the story interesting. If I wrote realistic conversations based on those in my brother’s family, I’d put my readers to sleep. So I made Aunt Caroline more querulous than she is in real life. I told my sister-in-law what I was doing and asked her permission before I used her name, and I think she understands, but it still makes me a little nervous to write her character now.

Question 5:
Will we see more of you in books? More Ashfall books, or different YA books, or anything adult.

Yes! I’m working on the final book in the ASHFALL trilogy now. After that, I’ll write something different. All the ideas I have right now are exciting YA novels. I’m not ruling out writing something different, but I’d be far more likely to write middle grade than adult books. A great novel needs conflict and change—when do we change more than as teenagers? Or get into more conflict? That’s why YA literature is inherently more interesting than adult literature. Most adults are kind of boring, honestly. 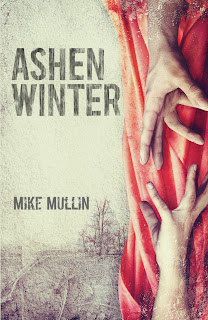 It's been over six months since the eruption of the Yellowstone supervolcano. Alex and Darla have been staying with Alex's relatives, trying to cope with the new reality of the primitive world so vividly portrayed in Ashfall, the first book in this trilogy. It's also been six months of waiting for Alex's parents to return from Iowa. Alex and Darla decide they can wait no longer and must retrace their journey into Iowa to find and bring back Alex's parents to the tenuous safety of Illinois. But the landscape they cross is even more perilous than before, with life-and-death battles for food and power between the remaining communities. When the unthinkable happens, Alex must find new reserves of strength and determination to survive.

Mike Mullin’s first job was scraping the gum off the undersides of desks at his high school. From there, things went steadily downhill. He almost got fired by the owner of a bookstore due to his poor taste in earrings. He worked at a place that showed slides of poopy diapers during lunch (it did cut down on the cafeteria budget). The hazing process at the next company included eating live termites raised by the resident entomologist, so that didn’t last long either. For a while Mike juggled bottles at a wine shop, sometimes to disastrous effect. Oh, and then there was the job where swarms of wasps occasionally tried to chase him off ladders. So he’s really glad this writing thing seems to be working out.


Mike holds a black belt in Songahm Taekwondo. He lives in Indianapolis with his wife and her three cats. Ashen Winter is his second novel.  His debut, Ashfall, was named one of the top five young adult novels of 2011 by National Public Radio, a Best Teen Book of 2011 by Kirkus Reviews, and a New Voices selection by the American Booksellers Association.

Details about the blog tour and the schedule can be found here :)

Where to buy Ashen Winter.
Autographed Copies - Indiebound - Amazon - Barnes & Noble - The Book Depository
Posted by Carina Olsen at 6:00 AM