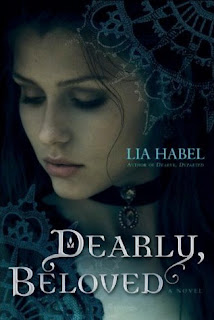 I am unsure how I feel about this book. At first I was sure I liked the first one more, but by the end I'm kind of liking this one best. It took me many hours to read it, though, because these books are long. Almost 500 pages. Some things I felt could have been left out, or been shorter, but I did still enjoy it all. Well. Mostly. There is a lot more violence in this book. I could have been without those scenes. Because they were written really well, in a way. And it was awful. But in a twisted way, I loved that the scenes weren't cut out; felt like they kind of needed to be there, so that we could see what some people were capable of.

I still loved the characters in this book. Might have been annoyed at Nora a few times, but mostly I did like her :) And I still adore Bram. Loved him a whole lot. Even though he is a zombie. But he's just so kind and loving and just amazing. I wouldn't mind dating a zombie like him ;p Just, yeah, one part of being a zombie I don't approve of :p Might be a bit silly though, so I won't say what. Anyway. There are a lot of different point of views in this book. Mostly Nora. And Bram. I loved Bram's the most.

But we also heard a bit from Pamela, and while I still adore her, she was a bit weird in this book. Still, I do not blame her one bit. We also got to know a new zombie girl; Laura. And she had some chapters as well. And I did like that. Even though I would have been happy with just Bram's point of view. But I am really glad we got to see different sides and such in this book. That was kind of awesome. Even Vespertine Mink. She was such a bitch in book one. Nora's biggest "enemy."

But I did sort of love her, still. She's still a bitch at times. But I kind of understood her as well, so I didn't hate her. And I did like reading from her point of view. Then there was Michael. We got many chapters from his point of view. And god. It was so awful. We got to witness a lot of torture. Not sure I really approved of that. But I also liked having his chapters in this book; because I felt like I needed them to make sense of some things. So I was kind of glad. Even though his chapters were horrible.

I did love the writing in this book as well. But something I forgot to mention in my review of Dearly, Departed was that a lot of the book felt like a history lesson. And much of this book felt the same. It made me bored some times, and lose focus. Which is why I'm giving both books a four star. But I did still manage to love both books; so I didn't mind all that much. Plus, Bram makes up for it. Anyway. Mr. Dearly didn't have a big part in this book. Disliked him a bit, but also kind of liked him. Complicated.

There is so many characters in this book. It would take me forever to talk about them. But I will talk about some. I adored all of Bram's zombie friends. They are all amazing. One that had a bigger part in this book was Coalhouse. And, well, I kind of really disliked him at times. But I also kind of understood him, and it was a bit sad. There is so many new characters in this book. Many I loved. Many I despised. Like Mr. Allister; Michael's father. We didn't see much of him, but hated him.

Especially since I knew of the things he had done. And were still doing. And were going to do. Gah. I hated him. Almost as much as I hated Michael, but I'm not sure that is possible. He was such a freaking asshole. I didn't like him at all. But he made an awesome story; so kind of glad he was there.. The plot in this book is better than the first one, in a way. There is so much happening at all times. And I adored it. Even though most things that happen are awful things. But I enjoyed the ending.

I was hoping for more romance in Dearly, Beloved, but there wasn't. There was less. I mean, no on-the-mouth kisses. That was very disappointing. But the love is still there, no drama between Nora and Bram. And I am forever grateful for that. Plus, like I said, I loved the ending. It was so sweet and awesome. But I will be beyond hurt if there isn't a third book. There must be. It CANNOT end like this. So many open things. Like the whole zombie thing too. I want a cure for Bram. Hih. Even though..

I know it most likely won't happen. I mean, he's dead and all. And he will be even more dead in just a few years. Sniffs. Sad about that. But I can accept it. Maybe. We'll see. Anyway. There must be a sequel. This book is really exciting, and I couldn't stop reading at times. It is a great sequel. I'm not going to spoil the plot, because there is too much. And it would talk forever ;) You'll just have to read it yourself. Because it is awesome. And if you read Dearly, Departed you'll love it. Promise. :)

One thing that kind of bothers me about these books are the covers. I mean, they are gorgeous. But they do not make sense. They doesn't fit that much with the story. They don't say that it is a zombie book. Or that it is a romance book. And that is a bit sad. Still, I do adore the covers :) Anyway. Now I'm just gonna hope for a third book. Would not be fair to leave us hanging like that. So I'm just going to keep hoping for that :) Liked the Bram/Nora ending, but need more of the other stuff.

Thank you to NetGalley and Random House Publishing Group
for the chance to read and review this book early. <3