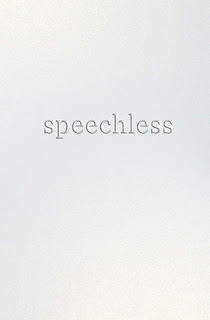 I'm pretty sure this is the first Contemporary book I have read. And now I want to read many more. Even though this is the first "normal" high school book I have read, I have also read tons of fan fiction some years ago. But it's been some time. And I couldn't remember what I was missing. Now I know. Speechless was amazing. And I managed to love it even though there was no magic or fantasy or anything like that. And for me, that is pretty awesome.

First I would like to mention the cover of Speechless. Some might mind it a bit boring. But I think it is perfect. I find it gorgeous. And unique. Plus, it looks even better in person ;) The real book is stunning. I am also really pleased with the writing. Because these days it is impossible for me to read a book if I do not enjoy the writing. But with Speechless I did. The writing is great. And I loved the story. It even made me cry. A tiny bit. But it also made me smile a lot. And that's good. Speechless is really sweet. And serious. It really is a perfect book. For me ;p

I have seen that a lot of people didn't like the main character, Chelsea, much in the beginning. And I can so understand that. But then, I didn't hate her as many other people did. Maybe because I'm still a teen myself. Or maybe not. But I kind of understood how Chelsea had it. In some ways. Because I also thought she was a total bitch when it came to some things, so there's that. Either way, though, I did like her. Thought she was an awesome main character. She's just 16, but she's still amazing.

Chelsea cannot keep a secret. Or so they say. And I can understand that, but the book isn't about that, not really. In the beginning of the book she sees something, something big. And she's drunk, so she tells it to her best friends and those around her. She thought it would be funny. Like I said, she was very drunk. And I cannot really blame her for saying it, not really. She didn't know how they who listened would react to it all. And I won't spoil that. Just what it says in the summary.

It ended with a boy almost getting killed. And Chelsea blames herself. And I can understand that as well, but, well, I didn't blame her for it. But I did understand it. And I did enjoy reading about it. Anyway. This incident leads Chelsea to take a vow of silence. Because who would want to hear what she has to say, anyway? She lost her best friend. And all her other friends. And I am so happy about that, to be honest. I mean, a lot of awful stuff happened because of that, but I still loved it.

Chelsea had this one best friend, Kristen. And I really didn't like Kristen. She kind of was a total bitch. Sorry for saying it. But, well, it's true. She is the popular girl in their school, the girl everyone wants to be. And Chelsea is her slave. lol, okay, not really. Thing is, she liked being friends with her. Because it was the only thing she knew of. But then that thing happened, and Chelsea did something Kristen wasn't happy about. And that was the end of it. Both happy and unhappy about it. Mostly glad.

I won't say much about the plot of this story. Or much more that happens. Because I loved reading about it, and I think you will too. Characters I loved in this book. Chelsea's parents were pretty awesome; I enjoyed reading about them :) Even though they did annoy me a lot sometimes :p We also get to know so many new people. Like Asha. I adored Asha. She was so kind and sweet and just amazing. An awesome friend. I kind of disliked Andy a bit. But I learned to like him, I think ;p

Then there was Dex and Lou, and I did enjoy reading about them as well. We didn't see Noah much. But I liked him too. Then there was the love interest, Sam. And I adored Sam. He wasn't your typical "pretty-boy." He was so much more than that. He was just so adorable. And kind. And sweet. And a bit protective. I loved him. He was also really cute :) There isn't really that big of a focus on the romance. But I loved it. There is some, and it is so sweet, and I just wanted a lot more of it ;p

There is also many other characters in this book, but I keep forgetting the names :p There are some jocks that I really really really hated. They were awful. And I really loved the art teacher. She was cool. There was a lot of awesome characters in this book. And I felt like they were all written well. And I enjoyed reading about them all. Just wish this book had been longer, because I didn't want it to end. I wanted more. So I will be hoping for a sequel sometime :) Even though it doesn't need to be.

Not going to say more about the book, because I do not want to spoil anything. Just know that the book is amazing. The plot is so great, and I adored all the characters. It is a really well written book. And I cannot figure out how to rate it. So I'm giving it a five star. Maybe four point five, but closer to five than four ;p I really did enjoy it. And I think you should read it too :) I did actually love the high school drama. Kept waiting for something worse to happen.. but I was happy with it all ;p

Goodreads - Buy it
Posted by Carina Olsen at 2:23 PM