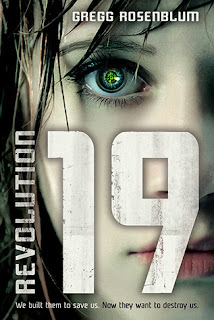 I don't know how I felt about this book. Okay, I do, but I'm not sure how to describe it. I wanted this book because of the pretty cover, and the summary that I found pretty awesome at the time. I expected more from this book than I got, which was a bit sad. It is pretty interesting, but I didn't love it at all. I didn't feel anything for it. So I'm giving it a three star.

I kind of expected this book to be a war book with robots. It wasn't. But it was still good. Kind of exciting. But I still didn't feel anything for this book. There are three different point of views, and I almost couldn't tell them apart, because to me it didn't seem like any of the characters had any feelings. Maybe Nick. But just maybe. I liked him the most, at least.

The book starts out kind of good. There are a lot of people living out in the woods, hiding from the robots. Seemed like a good place to live. Then everything goes boom, and their place is gone, because of something stupid Kevin did. Still a bit angry at him for doing it. Didn't seem like anyone else was, which kind of sucked. Anyway. The plot is interesting. Could have been a lot better, but I didn't stop reading the book, so it couldn't have been that bad. I was interested in this book, for the most part.

This won't be a long review, because I can't figure out what to say about this book. The writing wasn't bad. But I didn't like the characters much. Nick was alright, at times. He lacked something, since I didn't feel anything for him. And Kevin and Cass too. I didn't enjoy reading about them much. They were just there. And Kevin did lots of stupid things, and he kind of seemed too smart for 13. Maybe. All three of them sounded too smart to have lived in the woods their whole life. But maybe that made sense.

We also get to see a lot of other characters. I might have liked this guy we met. But still. We didn't learn enough about him for me to feel anything for him. Then there was this girl, and I didn't really like her either. She was too much, to be honest. She just risked her whole life for these three teenagers, her life and her parents life. And I get it, but I didn't think it seemed realistic in this book. Plus, I just didn't like her much or felt anything for her either. It all kind of sucked. I wanted to like them.

There are robots in this book. They aren't like I had expected. Won't say more than that, since you should just read it yourself. I didn't even enjoy the robots. Which also kind of sucked. I feel like my review is all just negative things, but I can't help it. I just didn't like this book. I wish the robots had been so much better. But they were interesting to read about. Sometimes. I also liked this one thing in the book, where Nick ended up. It was awful. And I enjoyed reading about that. Until he got broken out.

There isn't more for me to say about this book, to be honest. Giving it a three star, because despite me mostly not liking it, I did finish it, and I kind of enjoyed it. Maybe. Either way, I do want a sequel. Because this book ends with a cliffhanger, to be honest. And I do want to know what happens next :) Anyway. You should read this book. Just read the summary first to decide if you really want to read it ;p