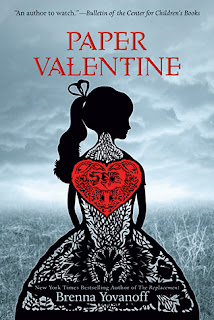 Been waiting a long time for this book. Finally got to read it :) It was different from what I thought it would be. A tiny bit disappointed about that. But I still loved it a whole lot, because it was a good book. I have read Brenna's other two books; The Replacement and The Space Between. Enjoyed them both. I like her writing, for the most part. And I like the way she tells stories. And I did enjoy Paper Valentine very much. Just yeah. Wish it never to end :) It says 368 pages on hardcover on Goodreads. Not true. It's just 304. Wish it had been longer. :)

I fell in love with the cover. It's just so pretty and unique and just gorgeous. I love it. And oh. The book outside of the cover art is gorgeous. So, so pretty. Yeah. I love this book a lot ;p I thought this would be a book about murders and that we would get a lot of dead people and such, and terror. It kind of is. Nothing graphic, though, which I'm kind of disappointed in. I love horror :D But yeah. I also enjoyed this book so much.

There is dead people, though. There is a murderer. There is ghosts. But there is also a broken girl and a broken boy. And oh. The boy is perfect. I might not have liked him at first, because he was so different from what I have read before in love interests. But I changed my mind very fast. Finny was amazing. So kind and sweet. He's big and scary, with a lost finger. And bleached hair. But oh. He was so adorable. So sweet. A bit of an asshole as a child though, but I didn't blame him at all. Sobs. Felt so sorry for him. He is perfect, though. So amazing.

I had some trouble reading this book in the beginning. Was a bit bored. But that might just be me, since I'm a bit tired today. It picked up really well, though. I enjoyed almost everything in this book. The romance is very sweet and real. I wish it had been even more, though. But I loved what there were. It was just so sweet, and I adored Finny and Hannah. This is kind of a weird book. And I liked that. See, Hannah is seeing the ghost of her dead best friend, Lillian. It's kind of creepy. But awesome too.

Lillian was just sad. So heartbreaking. She's with Hannah all the time. But no one else can see her. Hannah did seem a bit crazy at times, but I adored her. And her little sister April. But yeah. Lillian was sad. She died six months ago, and the way she died was just goddamn awful. She died of Trevor. Which you will understand when you read the book. It isn't a person. And it's awful and sad and so real. Also, I hated their friends. I just didn't like them at all. Which I kind of liked, to be honest with you all.

I did like the mystery of the murders. Of all the dead young girls. It was kind of creepy. But yeah. Not creepy enough. Wish it had been more. But I did enjoy reading about it all :) Was just a tiny bit disappointed in the murderer. Maybe. I'm still unsure about it all. But I did like the mystery. And the surprises. The writing is mostly good, and I enjoyed reading Paper Valentine a lot. There is some action. Which was good. And oh. Yeah. I enjoyed the romance a lot, like I mentioned :) It was just so sweet.

Because yeah. Finny was an amazing character. He was just so broken, to be honest. He seems like a big scary guy. And he kind of is. But he's also very soft-hearted, and kind and sweet and protective. He's nice. And he and Hannah fit together really well. He's been bullied a lot because of how he dress and looks and such, and it wasn't fair. It was just mean and cruel and heartbreaking. And I loved it very much. Giving this book a four star, because while I loved it, I had a few tiny issues with it as well.

Anyway. Not sure what else to say about this book. I liked the characters a lot. I liked the story and the writing. Wish the book had been much longer, and that there will be a sequel. But I did enjoy this book very much. Hannah was a great main character. She changed a lot in this book, which was good. I think you should read Paper Valentine. It is different from what I thought it would be, but it was also amazing.

Goodreads - Buy it
Posted by Carina Olsen at 5:23 PM