I'm taking part of the Level 2 blog tour today :D I read this book a few weeks ago, and I enjoyed it very much. You really must read it. Also, Lenore is adorable. You should totally follow her on twitter. Anyway. I'm so happy to be a part of this blog tour. My post will be a guest post with Lenore, where she will talk about how she incorporated the play Our Town. I am very happy with this :D Thank you so much for sharing, Lenore! <3 Please leave a comment for her below, if you wish :) And read her book. You must.

First performed on stage in 1938, Thornton Wilder’s play OUR TOWN was the original teen dead girl story. It was hailed as innovative for it’s time because it broke the fourth wall and used minimal stage sets and props.  The narrator spoke directly to the audience about Emily’s life, death and the transience of our time on Earth.

OUR TOWN shares a lot of themes with LEVEL 2 – that of living life to the fullest and the value of even the smallest moments and relationships in our life.  But I when I first inserted an OUR TOWN reference into LEVEL 2, I wasn’t doing it deliberately. It was a very unconscious act, as drafting often is. As I worked on the story more, I noted the parallels and more consciously referenced it. Still, in the first draft, its inclusion was relatively minimal.

It was my editor who urged me to explore the relationship between OUR TOWN and Felicia’s story more fully. It is thanks to her that Neil performs George’s part in the play, something that added romantic tension in the underground church memory and emotional weight to the very last scene of the novel.

Three levels. Two loves. One choice. Debut novelist, Lenore Appelhans has written a thrilling otherworldly young adult novel about a place that exists between our world (Level 1) and what comes after life (Level 2).

'I pause to look around the hive - all the podlike chambers are lit up as the drones shoot up on memories ... I've wanted to get out of here before, but now the tight quarters start to choke me. There has to be more to death than this.'

Felicia Ward is dead. Trapped in a stark white afterlife limbo, she spends endless days replaying memories, of her family, friends, boyfriend ... and of the guy who broke her heart. The guy who has just broken into Level 2 to find her.

Felicia learns that a rebellion is brewing, and it seems she is the key. Suspended between heaven and earth, she must make a choice. Between two worlds, two lives and two loves 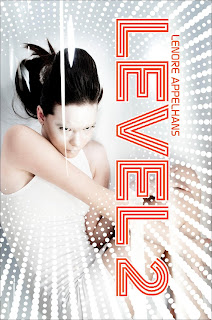 Buy your own copy of Level 2 by Lenore Appelhans:
Book Depository - Amazon - Barnes and Noble
Posted by Carina Olsen at 6:00 AM