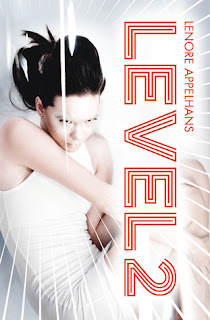 I want to start by saying how much I adore Lenore. Have been following her blog for way more than a year, and I have adored her ever since. She's an amazing person, blogger and author. When I found out about her book, I knew I needed to read it. Didn't get a review copy of it, but luckily I won a UK paperback via her blog :D It is signed too. Perfect book that I won. and now I finally had a chance to read it. And while it is amazing, I also had a few problems with it. But I also loved it. Will try to explain my feelings for it in this review. Hope I'll manage to do so :)

Level 2 is about Felicia. Who is dead. This is about her afterlife, where she ended up after she died, and why she is there. This book is exciting and surprising. The writing is very good. And I liked most of the characters. I really did. We get to learn a lot of Level 2, which is the name of the place Felicia is in. We get to see some friends she has there, and I liked that. But also felt we didn't get enough about them, but still. I liked what there was :)

We also get to know how she spends her days, and how she looks. I kind of didn't like the way they looked. No hair. Boring clothes. Pale white. But it was also very real and unique, and I liked that a lot. It just also seemed so depressing. Felicia spends her day watching her memories of her life on Earth. She mostly just watch every memory she has of Neil. Which was very sweet. I liked reading about their love, their romance. It was very sweet and real, I loved it.

I also loved Felicia. She is an amazing character. A few things she did annoyed me, but I didn't mind that much, and mostly I did love her. She's kind. She's also broken. She did something very stupid while she was alive, she betrayed her best friend, by hooking up with her almost-boyfriend. And I loved that. It was kind of awful too. But I also had a few issues with it, since I didn't think it was done very well. Like the final scene with Felicia and her best friend. But I also enjoyed reading about it, somewhat ;p

The guy they are both with is Julian. He is in this book a lot. The summary mentions a love triangle. There isn't. Felicia was with Julian ages ago, and then she was with Neil. Now she is with neither, as she is dead. But Julian is there. And he still has a thing for her, it seems. I supposed he could have been an awesome love interest. But he did some stupid things in the past, thank god ;p And Felicia doesn't have feelings for him anymore. And there is no kissing between them, alas, no love triangle at all. Yess.

But we do get to know Julian a lot. He's kind of weird. A bit confused about how things ended with him in this book. But I also understood it, mostly. I just didn't understand why he felt so much for Felicia. But yeah. I did like her, so I guess he did too :) He's in this book a lot. In Level 2. Lots of scenes with him. And yeah. I might have liked him a little, as a character. So I liked that. We get to know some of his friends, who I didn't like at all. But I liked that they were all in this book. Made it more interesting.

We also get to know Neil. Felicia's boyfriend before she died. And omg. He seemed like the sweetest person. I only had one fault about him, and that was the Christian thing :p But that's just me. Because I don't belive in God at all. And it is a lot about Church in this book. But yeah. We all have our own belives :) And I understood why they both did, so I did enjoy that. Also. Neil was just adorable either way, so I just loved him a lot. He's sweet and loving. They fit together well. He's also very forgiving. Sigh.

We get to know a lot about Felicia in this book. We are mostly in her memories in this book. And I liked that. We got to know many sweet things. And not so sweet things. All perfect. I liked reading about those. About her memories with Neil. Sigh. Didn't like reading about her and Julian. I also liked that Felicia didn't forgive herself for what she did to her best friend. But I also think we should have gotten to know more about that, when her best friend found out. Needed a bit more about that part.

Anyway. I mostly loved this book. Found the writing to be very good. And I liked most of the characters. And I did like the story a lot. But while I loved this book, I also disliked some parts.. And now I will talk a bit about those. Hoping not to be negative about it at all. But yeah. I must explain my three point five star. I had some issues with the way Felicia was behaving towards the new people she met, like Eli. The way she thought. It didn't seem very realistic, since she had only been with him and her one time.

She didn't interact with these new people much, just maybe a few hours, and yet she knew how they would react and such. I just picked up on that (A) Probably don't matter to most people. I also had some issues with the action scenes. They were a bit rushed, and I didn't feel much while they were happening at all. While in the romance memories I felt very much. So it might be just me, maybe. A few other things I didn't like as much, but those are mainly the most things. That I didn't feel very much. But anyway. I did enjoy this book a lot, and I cannot wait to get my hardcover of this book as well :)

I'm unsure about how to rate this book. I wish to rate it as a four star. But I had a few issues with this book. So I'm rating it as a three star, but it is a three point five for me :) And I did love it. I enjoyed it. I loved the ending very, very much. And I cannot wait for the sequel to this book; Level 3. I'm pretty sure it will be even better than this one. I cannot wait to read it. Especially with how Level 2 ended. The ending is so good. And kind of perfect. I can't wait to see what happens next with Felicia and Neil. <3
I think you should read this book when it comes out. It's amazing and very unique. You'll love it :)