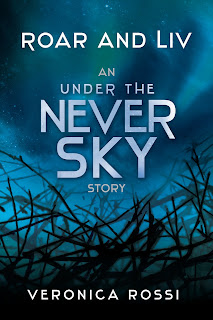 This is a story about Roar and Liv. We didn't get to meet Liv in Under the Never Sky. A bit sad about that. Hoping she will show up in the sequel. Anyway. We do know Roar, though. And I might have loved him a bit more in this short story. Never more than Perry, though. But yeah. Roar is awesome. He's sweet and kind. A bit dumb, and he might drink a lot, but I still liked him.

The romance between Roar and Liv is so good. They are like made for each other. And I liked that. I liked reading about them. But yeah. Nothing that good ever lasts. This story centers around the time where Liv got sold to another Blood Lord. An rich, evil man. We don't meet him. But I kind of don't want to. He sounds awful. But also kind of fascinating, to be honest.

While this short story is just from Roar's point of view, which I loved, we also get to see Perry. And omg. He's just so perfect. But my heart seems to break for him all the time, which kind of sucks. He had such a bad time growing up. And now, with his brother Vale as the Blood Lord. His brother is a cruel man. I didn't like him at all. Gah. Evil creature. Just like his father. Anyway. Perry is amazing. So sweet. And protective. And kind. And just all kinds of loving. Yeah. He is my favorite character, always.

Anyway. This story is mostly about Roar and Liv. And I did love that. Even if, as you all know, this story does not have a happy ending. I do have hopes for Through the Ever Night, though. Hopefully. It's just so depressing. This short story is amazing, and you really must read it if you have read Under the Never Sky. The writing is good, and I just adore all the characters. The plot is great as well, hih :)

Goodreads - Buy it
Posted by Carina Olsen at 6:13 PM