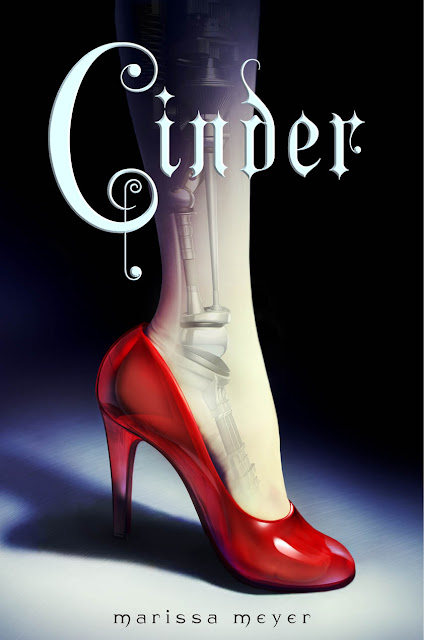 I just finished reading Cinder for the second time. Read it first when in came out; in early January. And I haven't been able to stop thinking about it since. And since then I have read so so so many books, so I really needed to do a re-read. And I did. And I am so happy I re-read it. <3 It just made me love this book so much more. Cinder is just beyond amazing. This post will be about my love for it.

Cinder starts out really good right from the first page. The book is mostly from Cinder's POV, and I really loved that. Cinder is an amazing character. She is a kind and cute girl, who does not have a good life. Well, not really. She seems to be sort of happy, but it is still so sad. The thing about Cinder is that she had no parents; and she is a Cyborg. There are many Cyborgs, but most people do not seem to like them at all. Which is wrong, I think. Because Cinder is too cute not to like :)

Cinder was "adopted" by a family when she was 11 years old. She doesn't remember anything about her life before that. And, yeah, that sort of sucks. But still :) But then the man who adopted her dies right away. Leaving her with his wife and their two children. And omg. Adri, Cinder's stepmother, is a horrible person. She is just.. so cruel. Although she may have her reasons to, I still cannot forgive her for it. She is very cruel to Cinder, and I hated it. But also loved it; because it made Cinder so good.

Then there are Cinder's stepsisters. Pearl is just as bad as her mother. Just as cruel. But then there is 14 year old Peony.  And oh. I adored Peony. She is a lot like her sister, but she isn't cruel. She is so kind, and so sweet. And I just really liked her. But also so sad. She broke my heart; and I wish she had been in the book more. Oh well. She will have a tiny tiny part in the next books, I suppose ;)

Then there was Iko. And I really loved Iko :D The first teaser below is something she says ;) Iko is an Android. A smart one as well; and I just really liked her. She is a great friend to Cinder. And I really wish to know more about her in the next books. There is a lot of other characters in this book as well. Like Queen Levana. She is just so evil. But also so awesome. And I'm sort of dreading finding out more about her. But I also need to know more. She is a very interesting character ;) But so bad.

Then there is the best character of this book. Prince Kai. There are many chapters in this book from his POV; and I really loved those chapters. Kai is a really great character; and I really loved getting to hear from his POV. Prince Kai is a very sweet boy. So kind and charming and smart and just really amazing. He is about to become Emperor. Meaning he would be the most important person in New Bejing. Which is all kinds of awesome; because to me he already is the most important one :)

Kai is just so sweet. And I loved the small romance that was between him and Cinder. There isn't much romance at all, but the little that is is just so sweet. It's impossible not to love it. Not to love Kai. There is only one kiss in this book; and it isn't really a real one. So that is my biggest wish for Scarlet. A real kiss between Cinder and Kai :) Preferably for than one. Hih.

Anyway, enough about all the amazing characters. Now I should say something about the plot. This book is a Dystopia, I suppose. Because some things I do not believe could happen in our world. But then, we never know, do we? ;) Anyway. Cinder is set way long into the future. But things still seem like they are today. Some parts. There is this deadly virus that is killing off many people. It isn't spreading fast; but it has killed many thousands for the past 12 years.

The virus in this book is done really well, and I enjoyed reading about it. Although it is really bad. I liked everything about the world in this book. So many interesting things to learn and read about. What I loved the most, I think, was the Lunars. They are extremely dangerous, but still so exciting to read about. And I really cannot wait to figure out more about them.

Also, the ending to Cinder is really cruel. In a way. It is so heartbreaking, but it is also so damn amazing. We learn many new things; something I has already guessed earlier ;) But even with the evil ending I cannot help but love this book. Although it did made me even more anxious for the sequel.

There is so many things happening in this book. So many great things. So many bad things. So many sad things. And extremely many heartbreaking things. But I still enjoyed it all. Also because the writing in this book is really good. Marissa has done an amazing job :) Then there is the so good plot, and the amazing characters and the sweet love story. And it is all just so good. A really must read.

I have too many things that I want for the next books. I will be tweeting about them later; but won't post about it here because those things I want will be very spoilery :) Just know that I am dying to read Scarlet and Cress and Winter. I need them all. <3 Hoping to be able to get an ARC of Scarlet soon; but if not, I cannot wait until early 2013 to read it :) <3

Anyway, this recommendation ended up being VERY long o.O But now you know why you need to read this book :D I hope. So just buy it. And read it. And love it. You will not regret it. <3 I should also let you know that the author; Marissa, is one of the kindest people there is. She is so kind and sweet and just really amazing. I love her. <3 (Also love that I have so much Cinder swag and a signed hardcover of Cinder. My precious.)


A couple of teasers from the book :)

Update: I am also sharing a teaser clip of the Cinder audiobook! I need to get this one, I think. Do you like it? If you do, you can buy it here. :) Also, blogger is not allowing any posting of audio snippets. So I posted the teaser on my tumblr; and here is is: http://carinaolsen.tumblr.com/post/21218958170
You really need to listen to it :)


Update: Newer and better review of the book can be found here.
Posted by Carina Olsen at 5:09 PM