Review: The Springsweet by Saundra Mitchell 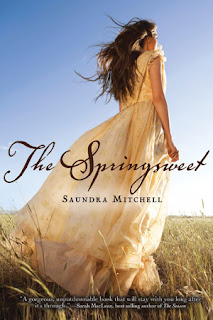 I almost think I liked this book better than The Vespertine. But only almost. The Springsweet is a must read book if you have read The Vespertine. Although it would be great even if you haven't. This book is even shorter than the first one; and although I wished to much it had been longer I loved it the way it is. It has perfect writing, perfect characters, perfect plot and an perfect ending. Although a bit evil.

This book starts about a year after The Vespertine ended. This is Zora's story. So it has been a year since Thomas died; her almost-fiancé. And Zora is grieving. She is grieving a lot. Because not only did Thomas die, but also another of her close friends. And she believes that Nathaniel and Amelia is dead as well. So Zora is really hurting. She wants to die at times, too.

But instead of doing so, she does something crazy to be sent away from Baltimore. She kisses a stranger at a ball. I didn't like him much. But that is only because Zora didn't. Because he would have been an awesome love interest if he had been fit for Zora. But he isn't. Zora then is sent to live with her Aunt, Birdie. And her adorable child. I loved that a lot.

Although things didn't seem that good out there in the wild western. It wasn't anything like what Zora had thought it would be. I, for one, didn't enjoy it much. So much hard work o.O I never would have survived. lol :) But I did like all the characters. Although Birdie was very pushy with certain things; I did like her.

I don't want to give away too much plot, but that guy, Theo, ended up following Zora; hoping to court her. And, well, I didn't like it at all. There isn't any romance between them; although Theo does seem to be interested in Zora. She is just being polite and such, but she does hurt him in the end. But I enjoyed that a bit. Hih. He just wasn't a match for Zora.

When Zora arrived in the new town, she was robbed. And ended up having to walk her way to the town. But on her way she met Emerson. And ended up staying in his bed. But nothing happened; though ;p But it was the start of everything. That night Zora discovered she had a power of her own. And I enjoyed that very much. Liked her powers :)

Then we got to know Emerson. And omg. He is an amazing love interest. And I loved every scene that he was in. He is adorable. And kind. And sweet. And just way too amazing. I loved reading about Zora falling for him. Emerson also has some powers; and I loved them as well. He is sort of broken; in a way. He is all alone. And I felt sorry for him and loved him all the more.

The Springsweet is very different from The Vespertine. The setting is even more different; although still in the same time zone. And I liked that a lot. There is always things happening in this book; and I loved that Zora thought about Thomas so much. She loved him a lot. The plot in this book is so great, and the characters amazing.

The ending though, the ending is mean. It made me want so much more! But the ending is also happy. But there better be a sequel. There must be! I cannot if there isn't. And the sequel better have the same characters (A) Hih :) Just really hoping there will be another book. <3 Also? Remember all the people I disliked at the ending of book one? I still hated them all.

Goodreads - Buy it
Posted by Carina Olsen at 6:56 PM