Review: Froi of the Exiles by Melina Marchetta 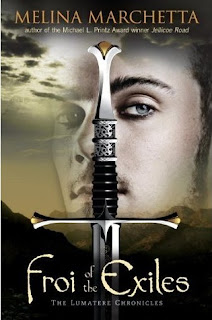 I cannot explain my feelings for this book. It is just too much. So I'm sorry if this review won't make much sense. Have way too much to say about this book. I think I will give it a four star. Although the writing and the story and some characters are worthy of more than a five star. But there happened some things that I hated so much, and I'm not a forgiving person when it comes to some things :p

I will start by saying that Froi of the Exiles follows the story of Froi from Finnikin of the Rock. He is now 17 years old, and a fierce warrior. I think. Seemed that way, at least ;p I adored Froi in this book. He still has a dark heart. But I love it. He is broken; and I'm hating those who are to blame for that.. But even though he is broken, he is kind and loving at times. And he is just amazing.

Most of this book is from Froi's POV. But there are some chapters from Finnikin and Isaboe's POV. And I loved that so much! I still love Finnikin the most. <3 And I loved knowing how he is doing. Hoping for even more in the next book. There is also POVs from Lady Beatriss, and I enjoyed learning more about her. Still loving Trevanion :)

This book was also told by the POV of Lucian. Didn't like him much in book one, but I liked him more in this book. Felt sorry for him a lot, especially in the end. And I hated that. It all just seemed so cruel :\ Then there was Phaedra. I'm not sure if I liked her or not. By the end of the book I sort of hated her. But with good reason. But she seemed kind. Mostly. I think.

The plot in this book is just as good as in Finnikin. I takes place in Charyn, most of the time. And omg. Charyn is a horrible place to live in. There are no children; because of a curse. And all the young girls are being whores. (They all call them that in the book.) And everyone is just so cruel in that place. And there is so much death and torture and I almost couldn't stand it.

Froi is sent to Charyn on a mission. While there he starts falling for the princess. The princess no one there likes. They are all so horrible towards her. But then. I can sort of understand it; because Quintana is not an easy person to like. I didn't really like her at all. She was a bit.. mad, I believe. Okay. More than a bit. And she was cruel so many times, but I also couldn't help feeling sorry for her. Because she wasn't to blame for it. Well. Not for all of it.

There is so many new characters in this book I had trouble remembering them all. But I did remember a few. Like Arjuro and Gargarin. The twin brothers. They are 40-something in age I think. And I sort of liked them. I liked them a lot at times, but then I started hating them. Because they treat Froi like shit; which he did not deserve and they were cruel many times. Although not Arjuro as much; so I liked him the best :) But they are amazing characters; so I don't only hate them.

Also didn't like Lirah much. I felt sorry for her most of the time, but I also though she was being way too cruel towards Froi. And I can't stand that. They were all being cruel towards Froi. Everyone. Well, everyone in Charyn. Finnikin and Isaboe and Perri and Trevanion and Lucian and many others love Froi. Which I really loved :)

We get to find out so many new things about Froi in this book. Many, many bad things. But also some good things. But mostly heartbreaking. Froi of the Exiles is a LONG and HEAVY book. But I loved every page. I think. But when I came to the ending of the book I cursed it for not being longer. It ends really, really bad. But it also ends at a hope. I think. It better. But it broke my heart so much. And I need the next one. Although I do not agree with who it will be about :\

The next book will be Quintana of Charyn. And I'm sort of hoping it won't be from her POV at all. Didn't like her much. Although in the last 10 pages I did care for her a bit. But I don't think her mind would be a good place to have as the books main POV. Hoping it will be from the other people's POV as well :) Really hoping that. I need more Finnikin and more Froi.

This book has it all. It is action. It has death. So much brutal death. But it also have happiness. And some romance and love. And I liked that. Something is always happening in this book; and it is always exciting to read about. So if you have not read this book yet, you must do so! And if you haven't read the first one, Finnikin of the Rock, either, then you must start with that :)

I have decided to give this book a five star, after all. Mostly a 4,5 star, but I do believe it is closer to five than four :) Even though I didn't like some parts; I loved this book.