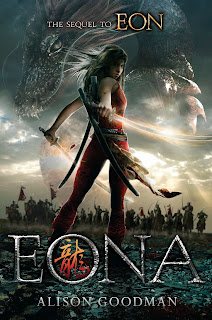 Eona is just as good as the first book, Eon. The plot is probably better. But I had a few personal issues with it; so didn't like it more. But loved it just as much, still :D I'm so glad I read these books. I have gotten a big love for Fantasy books. And this is a huge fantasy book. So, so good. Also; I am in love with this cover. It is simply stunning. And so.. powerful.

I'm having trouble deciding how to describe this book. You probably shouldn't read this review if you have not read the first book. But you can still do so; if you don't mind being spoiled about it :) I'm having trouble finding words because I loved this book so much. Eona starts right where Eon ended. A couple of days later. With the Pearl Emperor missing, Ryko dying, Ido captured.

It ended with so much pain. And the sequel starts with so much pain. So much death. But it is also all so amazing. Ryko is dying, like I said. But no one wants him to die. Eona has lots of power; but she doesn't know how to use it. But she manages to use her dragon powers to heal Ryko. And it kills so so many because of the little control. And omg. So much changes with that healing.

There is so much betrayal in this book. So much pain and heartbreak. So much suffering and torture. It is all truly horrible. But it is also so extremely good. The story is so captivating, and the characters are so amazing, and the writing is still perfect. It isn't possible not to love this book. Not to love this story. This book makes you feel so many things at once. Good and bad.

Don't want to talk about the plot. It is too awesome. A must read for yourself ;) But know that it is amazing. It is surprising at times, and exciting, and horrible and all kinds of amazing. So much is happening. It is an amazing fantasy book. And I loved it so much. It is all building until the end. Sort of. Although everything is just as big and important. But the ending was the climax.

Like so many other books this book ends at the end of a big fight/showdown. And I sort of loved it. The ending is amazing. But oh. So many dies. I hated that this one person died. Loved that another person did. So confusing. But so good. The ending is good, but I also wish there would be a sequel. The ending could be final; but so many things could be in a sequel. Really wish for it :)

Time to talk about the characters. There is Kygo. He is an amazing character. Think I loved him the most. He is kind and so damn sweet. Wish he could be my boyfriend. But he is the rightful emperor, and he has a huge responsibility. But the thing is, I understood that. I knew that his people came first. It is the way it is. Hated that Eona didn't understand that. She didn't undertand much :\

But Kygo is so amazing. He didn't deserve to be treated the way Eona treated him at times. But I also wished them together. Then there was Lady Dela and Ryko. They does make a great couple ;) Lady Dela is an amazing character. Liked her. But didn't like Ryko much in this book. He seemed so mean. But, I could also understand why. Even though I did not like it.

Then there was Lord Ido. I hated him. But I also sort of liked him. He was so broken when he was captured. It hurt me to see it. But because of my love for Kygo I did not love Ido. Plus, he is a bastard. A murdering bastard. Who only cares about what he wants. I could say he manipulates Eona, but he doesn't. I blame her for everthing she did; because she's changed too much.

You see, I love Eona. In a way she was a better character in this book. But I found her to be worse. I loved the romance between her and Kygo. It was real and sweet and so good. But she doesn't trust him. She keeps so many important things from him; and I sort of hated her for it. And then she has the nerve to be hurt when he keeps a few small things from her. It is not fair. And she keeps hurting him.

I hated that. She didn't seem to care much for him :( And it was unfair. Because he is so good and I adored him. I do believe she loves him, but I also believe she was a whole lot of selfish and wanted power more. At least through over the half of the book. Then she did something even worse. She started to do things with Ido. Through their dragon power; lots of passion/pleasure. Hated it.

She kissed him, and she liked it. And I hated her for it. Especially since she never told Kygo. But Ido did. And omg! I hated that even more. But then, I sort of feel that she got her punishment for it near the end (A) That is probably evil of me, but I do not care. Still, though. Even though she was so consumed by the power in this book I still loved her. She is an amazing character.

Can't believe I forgot to mention the romance. Even though Eona isn't so kind in this book, there is romance. There isn't very much, but there is amazing romance between Eona and Kygo. It is so sweet. And so perfect. And I loved it a whole lot. Wish there had been more; but I am happy with what there was :) Because it was real. And I loved their kisses ;p

We see more of the dragons in this book. And I loved that. It was all so amazing. Won't spoil it. But I did love the bond between them :) There is so much amazing in this book. You really musn't miss it. If you have read Eon you MUST read Eona. <3 If you haven't read either, read them both. Worth it.

Goodreads - Buy it
Posted by Carina Olsen at 9:59 PM