Review: The Calling by Kelley Armstrong 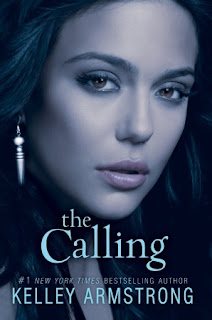 The Calling was a really quick read. But an amazing read. Better than the first book, I think :) But also worse, in a way. I'm having a hard time deciding how to feel about this book. The writing and the plot is a lot better than The Gathering, but there was this one things that was a thousand times worse; and it is killing me. Still. Going to try to still love it :D

Warning: there will be spoilers in my review. Spoilers for the first book; and spoilers about a few things that happen in this book. Just so you know :D I'm just not able to talk about this book without including some things.

The Calling starts right where The Gathering ended. They are all in a helicopter; trying to escape a deadly fire. But also trying to escape capture by some unknown people. There is Maya, Rafe, Daniel, Sam, Nicole, Corey, Hayley and Kenjii. Plus the pilot and the mayor. Things seem to be going all right, for the most part. Of course, if you don't count the fact that Rafe is unconscious and Annie is missing.

But still. They are mostly all there. Until they notice the mayor isn't awake. Then they notice he has been drugged; and things go downhill from there. The pilot is out to capture them, not sure who he was working for though; considering there is way too many bad guys in this book. But it ends up with the helicopter crashing. But before that; something horrible happens. Rafe falls out.

And omg. It killed me. Especially considering he hadn't been in the book yet at all :( And I adore him. Way too much, I think. After he falls there are only the other teenagers left. And Maya seems broken about Rafe; because no one is thinking that he could have survived. But I'm a bit sad that she didn't seem sad enough. I wish she had cared a bit more.

Anyway, a whole lot of things happens after this. I won't go into more plot; because it is really, really awesome to read about :D I will say some things, though. Like the characters. I liked Nicole in the first book. She seemed like a nice friend. In this book, though, I hated her. Still unsure if she really is the bad guy, but it does seem that way. I liked Sam a little bit more this time, though :)

Then there was Hayley. She seemed like a cruel person in the first book; but she isn't. Not really. It was only Maya being cruel; at least in my opinion. But, oh well. It did happen. I am liking Hayley, though :) She seemed awesome. As did Corey. He's a bit weird, but alright. Unsure about his supernatural power, though. Because they all have some :D

And that is an awesome part of this plot. I'm wondering what power Nicole/Hayley have and that Serena should have had. It seems like it should be something awesome. Also want to know about Corey. But oh, I'm liking the power to Sam and Daniel :) It is sort of awesome. Not as awesome as Maya's, though. Which we learned in the first book ;)

Maya's power is explored a lot more in this book. Not enough, but much more :) And I enjoyed it. But. I also hated it because Rafe wasn't there with her. I wanted him there. Maya wanted him there; although she did not think of him often enough. But then, too much happened in this book for her to really focus about losing Rafe. But I still wish she had. She thinks about him sometimes; and I loved that.

Here is the big spoilers though. Why I'm not sure if I like this book. Because I loved Rafe. More than anything. And he is not in this book much. A few pages in the beginning; 20 pages in the end. And I just needed more of him. Loved what there was in the end; but it wasn't enough. Especially with that ending. The ending was cruel. And I hated it. But also so excited for more.

I was worried there would be a love triangle. But there isn't. And I'm so glad about that :) But I fear there is one in the next book. Because it is so obvious that Daniel has feelings for Maya. I'm just hoping she has more feelings for Rafe; and won't "test" how she feels about Daniel by kissing him and who knows what. That is the thing I can't stand about love triangles. It better not happen.

Anyway! The story in this book is so amazing. Lots of things happen. Many baaaad things, but also a few good. The Calling is a action-filled book, with lots of mysteries. And I loved it. There is still so much I need to know; but I'm hoping it will be in the next book. Please. At least let there be more Rafe and Maya. Please. I need it. So much. <3

Goodreads - Buy it
Posted by Carina Olsen at 8:33 PM