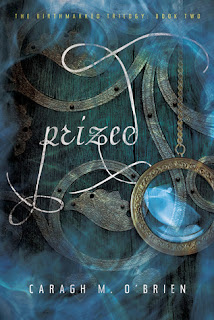 I apologize in advance for my review. It is a bit negative with a little cursing. But I am being honest in it.

Before starting this book I knew there was so much I was going to dislike about it. And there was. So I'm not sure if I should give this book a three star or a four star. I'm conflicted. Cause the writing and plot is worthy of at least four stars. But I didn't enjoy this book. I enjoyed some parts, but mostly I didn't enjoy it at all. All because of another stupid love SQUARE that didn't have to be there at all.

And I'm feeling so bitter about it. Because this book could have been perfect without it. Not talking about just this book; but I don't get why authors think their books will be better with a love triangle/square. It only makes me dislike the book so much I consider not finishing it and getting rid of it. I have such strong feelings on this topic. Won't talk much about it. Just know I cannot stand triangles.

I was a bit sad, starting this book. Because the entire book is in a new place. And I just wished it had been back near the Enclave; because that was one of the reasons I fell in love with the first book. That, and Leon. And Leon isn't in this book much. And Gaia is acting like an asshole. And argh. I'm just not happy with it at all. I can understand that some would like it; I'm just not one of them.

Even though it is in a new place, the plot is great. And the writing is perfect. This new place; Sylum, is a horrible place, really. It is run by woman. And there is 9 men for every women there is there. And that is a lot. So few women, and so many men. I felt so sorry for the men at all times; because there are lots of rules in this place. And I hated them all. For the most part. It was just cruel.

And the place is run by this evil woman. She seemed so so so old, but she was only 33. Still. She was a cruel person and I didn't like her. Not ever. This is the place Gaia and her baby sister Maya is taken to. They are nearly dying; so they don't have much choice, really. But I hated Gaia for letting it happen. She wasn't nearly the same person as she was in the first book. And that killed me.

I could say I liked Gaia in this book. But I didn't. Not even for a moment. Not really. She is selfish and cruel. She didn't care about rescuing her sister or Leon. She was more obsessed with "winning" over an evil woman. And I hated her so much for it. Especially because of Leon. See, Leon is in this book. In prison. For two months. While Gaia don't do a single thing. And I will never forgive her for it.

Cause she helped Peter later on, without even thinking about it. And it fucking sucked! And I'm sorry for being so negative. But it's true. Gaia is selfish and cruel and I don't see me liking her anytime soon. But Leon loves her. And because of that I wish Leon to be with her. But only because of that. Since I won't ever forgive her. She didn't even do anything to make me WANT to forgive her, either.

And that was the worst part. Well, not really. The worst part was when she fell for two brothers. Peter and Will. She had feelings for both, and messed with them both. Only one kiss with one of them, but it was TOO MUCH. And I hated her for it. Because it didn't make sense. She was supposed to care for Leon, and try to be with him. But she didn't care at all. She couldn't have. And that is my opinion.

If a girl is supposed to love one boy, there could NEVER be a love triangle or anything like that. Because how can she truly love one person and hurt him so fucking much by being with someone else? It is not fair to the guy she supposedly loves. I just hate love triangles so much. Not just in this book. But in so many books. I will never like reading about triangles. Avoids it at most times.

Anyway! I am sorry for being so negative in my review (A) But I needed to be honest. And I needed to share my feelings about this book. So, despite the writing being perfect, and the plot being amazing, I didn't love this book. I loved Leon. Leon is just as perfect as he was in book one. Probably more. He is more broken. But he is perfect. And sweet. And I HATED Gaia for how much she hurt him.

And she didn't even try to make it better. And gah. Why do people think that's okay? That a girl can hurt the boy and just get away with it without trying to make it better? It isn't fair. Not at all. And I will not ever forgive it. Maybe if she does something about it in book three. But I doubt it. Anyway! I did sort of enjoy this book. There were some sweet moments I loved. Especially at the end.

Overall, this book is a three star for me. I'm not happy with it. But I am dying to read the third book. Because things are finally getting interesting plot wise. Well, more interesting. And I cannot wait to see what happens next! Plus, I need more Leon. Anyway. If you have read book one, you should probably read Prized as well. :)

Goodreads - Buy it
Posted by Carina Olsen at 3:25 PM