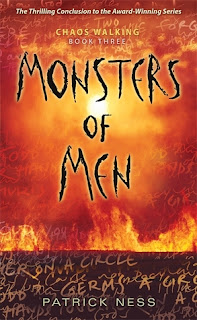 The third and final book in this trilogy by Patrick Ness. And I have loved these three days of reading so much. Even though they have killed me. Because once I started reading, I couldn't stop. Even though I wanted to at many times. I just couldn't. Because this series is amazingly good. And the writing is perfect. And I'm so picky when it comes to good writing. I need that. And this series has it all.

Still not thinking it is YA books, though. Even though many of the characters are just children. Well, they are between 13 and 16. But it seems so much.. older, in this world. And it probably is; cause nothing is normal in this world Patrick has created. Nothing. I wouldn't recommend it to people younger than me, though ;p I'm 19. Because some things are really brutal and graphic and heartbreaking.

Also, thinking he made it YA because there isn't any romance in these books. And that is so extremely sad. Well, there is one kiss. ONE. But it is good. It really is. I just wanted more. So much more. Because even though there isn't much romance, there is a whole lot of love. And we always knows how much Todd loves Viola. And she him. Well, sometimes. Sigh. I just need more.

I also wish there will be a fourth book. Because this book ends so.. cruelly, in a way. I mean, it is a satisfying ending. But it is cruel. And I couldn't believe it ended so fast. And there is still so much more happening. And I need to know it all. And even though it was 600 pages it wasn't nearly enough. I just need more and more and more. And I really, really, really hope there will be one more book. :)

Back to the book. :) Monsters of Men is a long book. 600 pages. One hundred pages more than the previous ones. Some things felt drawn out; a little bit too long. But I also felt like everything had to be there. Because everything is important to the story. Everything. Wish there had been a few more things; like romance. But I am mostly happy with this book. Because it is epic.

I'm glad this book didn't have months of time jumps. Wouldn't have been able to handle that again. It has a few weeks time jump; but they aren't bad weeks. So I didn't mind. What I am disappointed in about this series though, is that we never saw Hildy and Tam die. And they never showed up. They are assumed dead. But we don't know. And I'm missing them. And I needed to know for sure.

See, another reason I need a sequel ;) Needs to know what happened. Also. I wish what happened to Manchee in book one didn't really happen. But it probably did. And it is killing me at all times. Missed him so much. There is a horse in this book. Todd's girl horse. And I loved her. Reminded me so much of Manchee, but I loved that. I loved her. Amazing character. Even if it is a horse ;p

Todd in this book was also amazing. He is being controlled in this book. Well, a little bit. And it is killing me. Because no one is aware, and no one is trying to save him. Not even Viola. And I hated her for it :p But then. She was almost dying herself. But she couldn't stop being selfish. She was just so upset that she couldn't hear every thought of Todd's. And it annoyed me so much.

Because it is only fair. Todd can't hear her. And she acted so cruel about it. Thinking he wasn't Todd anymore. And omg. It was so heartbreaking. I might have forgiven her in the end. A little bit. I did enjoy reading about her. Because she is interesting and strong. And Todd is perfect. Still so kind and sweet. And growing up o.O I loved that. Then there is the Mayor. The bad guy. And omg.

I still hated him so fucking much. But I also understood him. And felt for him at parts. And that is even more painful. But still. He was an exellant villain and character. Written so well. Then there is 1017. And omg. Such a complicated person. Evil most of the time. But I also cared for him. But hated him at the end. For the most part. Still so amazing to read about. Then there was this other character.

Won't spoil it. But it doesn't happen until after 400 pages. But when it does, it is perfect. Love that character so much. *Sigh.* The plot in this book. Well. It is mostly war. War against the Spackle. I won't say much about them; cause it's too much to say. They are amazing. And weird. But still so cool. The war is big. And there is so much graphic death. Still loved it though; since it was so real.

There are lots of plot twists in this book. Lots of surprises. Lots of death and violence. Some love. Sweet. Mostly heartbreak. But that's what I loved. Couldn't stop reading. And I just need more. Didn't want to leave this world. Because it is created so well. And gah! I NEED MORE. You hear me? I do. I really, really, really do. Oh, please. Please let there be another book. *Prays.* Hih :)

Anyway! This series was so damn good. Giving this book a five star. Cause it was better than the second one. And a four star is way too little. It is so good. Heartbreaking, but amazing. This series is a MUST read for everyone. Really, it is. I don't think you will regret it. I hope not, anyway :)

Goodreads - Buy it
Posted by Carina Olsen at 8:28 PM