Review: The Ask and the Answer by Patrick Ness 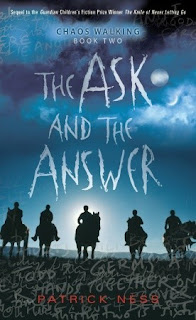 I cannot decide how I feel about this book. On the one hand, it is just as good as book one. But only plot wise. Because it had some things I could not stand. So I think I'm giving it a four star. I couldn't stop reading it though, and I loved that. Was just annoyed lots of times :p Hoping it will be better in the last book :D I have some hope with the ending. But I also know some of what happens.. Still, so excited!

I think it will be hard for me to describe this book. So I'm just gonna describe it a little bit. Since, you know, if you read my review of book one you already know how I feel about the world and some characters. :) Although. I might have loved Todd in this book even more. He is so broken. He does horrible stuff. But I feel for him more than anything. And I'm hating everything for him. And.. *sobs.*

Todd is just an amazing character. Still the main character. But now Viola is having her POV in this book as well. For maybe half of it. And I must say. I sort of hated her in this book. She just abandoned Todd. And I HATED it. I could have understood it, but I didn't. I really didn't. She might have cared, just not enough for me. Never enough. Although, maybe at the end. Maybe.

But even so. I do like her. Sort of. She is an amazing character, and I love that she is a part of these books. I just wish this sequel had been better. And here comes some spoilers. Because I cannot not say it. I need to. What I couldn't stand about this book was how long Todd and Viola was apart. For MONTHS. Many months. I hated it. So much. And then it seems like Viola has feelings for someone else.

And it better not be anything like that in the third book. Cause there hasn't been any romance between Todd and Viola yet. But it is there. I can feel it. Read it, see it. It is there. And it better be more. It must be. And I just cannot stand a stupid triangle on top of all the heartbreak in this series. I cannot stand it. I have hope for book three. But it is 600 pages long o.O Anything could happen.

There is a lot of new characters in this book. This old woman who Viola is with I really hated. She is evil. Hated her. Hoping something might happen with her in book three. :) Then there is Davy. He was an asshole in book one, but I loved him in this book. Well, he is an asshole at first. But he gets so good. He is such a great friend to Todd. And I loved him. And my heart broke so much for him. :(

Then, of course, there is the Mayor. Mayor Prentiss. And you wouldn't believe all the hate I have for him. SO MUCH HATE. But I also understood it all. And that might be worse. But I loved how it was a part of this book. One of the reasons I love this series. Because this series kills you. It really does. But it makes you want it. Because it is written so well, and it is so exciting all the time.

There is so much death and torture in The Ask and the Answer. More than in the first book. And it is brutal an graphic. But I also didn't mind :p Because it felt sort of real. And it was horrible. But I loved that it was included. I don't have much else to say. The plot in this book might be better than the first book. There is just so much happening. Lots of war. Lots of armies. Lots of stupid people.

But also some hope. Well, not much. And not often. But it is there. This book is awful. It broke me so many times. But I also loved it. I loved it because of that. Because the characters are loveable and the story is catching and the writing is stunning. And I don't want to spoil any of the plot, so I won't say more about it. You'll just have to read it yourself. :)

The Noise is still in this book, though. And the story about that is really interesting. I loved reading about it. Even though it is horrible most of the time. But it is very interesting to read about. :) And I'm excited to find out what happens next about it all.

I am very excited to start the next book. But I am worried. I am hoping it will be better than this one. But I also know how it ends. And I'm not sure if I'm pleased. Well, we'll see. :) Anyway, if you have read The Knife of Never Letting Go, this sequel is a must. If you haven't, you must get started! So good.