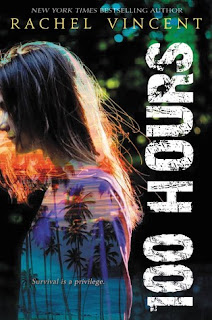 Gosh, I really tried with this book. I truly wanted to love it. Cause it looks so amazing. And I have read one book by Rachel that I really loved, and one more than I liked a lot. And so I thought I would love this one too. But, yeah. I did not. Not at all. And I just barely managed to force myself to read all of it. It was so painful.

I will try my best not to share that much about what I disliked about this book, lol. But it will be hard not do. And I disliked just about all of it. And I need to write about it. Ugh. Might be a few spoilers. But yeah. I really don't recommend that anyone reads this book. And that makes me a bit sad, to be fully honest. Sigh.

I have decided that I'm giving this one star. Because I seriously did not like it much at all. I don't think there was anything that I truly liked, to be honest. I loved nothing about it. Which makes me so sad, cause I really wanted to love this book. But it was just impossible. I guess that others would enjoy it, but these type of characters were not for me. At all. I had so many issues. Sigh. I must admit, though, that I think the plot could have been great. It was supposed to be about teens being kidnapped at night and held for ransom. I thought this would be exciting and scary and full of death. It was so not. I didn't find it exciting at any moment. Sobs. It took one third of the book before the first death. Sigh. And I did not care. Spent just about all of this one not caring.

I'm trying to figure out what to say. Words seems to be failing me. Because this whole book was one big fail. So disappointing. I thought it would be so good. But it was so not. Sigh. 100 Hours is told from two point of views. Genesis and Maddie. They are cousins. And oh gosh, I did not like either of them. They were both horrible. Genesis is a spoiled rich girl, with stupid rich friends. She just drinks and party all the time. She and her boyfriend cheat on each other all the time. Made zero sense to me. I did not like them.

And Maddie wasn't really any better either. She's supposed to be sort of a nerd, I guess. Thinking she's above Genesis and her friends. Always thinking badly about them, laughing about them and such. I feel like I learned so little about Maddie and Genesis. I don't know much about who they are as people. But I still know that I did not like any of them. They were both awful. I couldn't care less about what happened to them. Ugh. Not good. I also didn't really like the writing much at all. Which just makes me so sad. Sigh.

I think my biggest reason for not liking these girls was because the book begins with them out partying at a bar. Maddie is drinking for the first time in ages, whatever, though they are just sixteen and seventeen years old. Ugh. I hate underage drinking. So yeah. She's drinking and having fun. And kisses the first guy she's dancing with. Then there is Genesis. She's there with her boyfriend. But she's flirting and seriously kissing some other boy she just met. Then she's making up with he boyfriend. Wtf. They made no sense.

I could have gotten over this bad beginning. Except it happened again. And again. Also, Genesis had a boyfriend. Sure, he wasn't such a good guy, but whatever. They were together. She kissed someone else early on. Then a bit later she meets another boy that she's suddenly all over and ends up kissing him so many times, and breaking up with boyfriend. It just made no sense to be at all. So much drinking. And so much kissing of different boys. I would never have done such a thing. And it bothers me so much. Sigh.

I guess the reason for why it bothered me so much is because this whole book takes place in just 100 hours. For real. And Genesis is all over the place with her feelings and whatnot. At the end she seems to be in love with this new boy. Made no sense. He seemed cute, but knew nothing about him. And Maddie. Sigh. She didn't have a boyfriend. But she was also kissing three different boys in this book. Wtf. Third boy seems like he would be love interest. But he was just fifteen and a nerd and they make fun of him.

I just. I had so, so many issues with this book. Spoiled rich kids. Drinking and kissing everything. And Genesis and Maddie wasn't truly friends either. I just. This whole book didn't make sense to me. And when they finally get kidnapped, I wasn't even excited. It was so so so boring. I didn't care about any of it one bit. The ending was boring to me as well. A cliffhanger, I guess, as this is a trilogy. But I will not be reading the other books. Sigh. I was so disappointed. The girls were awful. The other people so boring.

I'm trying to decide what to share about this book. And I'm sort of coming up empty. I thought I would want to write for ages about the things I disliked, lol, but I didn't have all that much I wanted to share. But I think I managed to share enough. This book was just not for me. I was so disappointed. And I would not read it again. Or recommend it for others. Sigh. Oh, well. I'm sort of glad I gave it a try. Maybe. It was so bad. Thank you so much to the publisher for having me auto-approved on Edelweiss. Means the most.