Review: A Tyranny of Petticoats by Jessica Spotswood 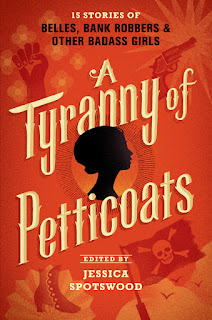 Oh. I'm so unsure about this book. I was very excited to read it, despite not really reading books that only contains short stories. But I adore so many of these authors. And I couldn't wait to read all their stories, and the other ones too. Plus this book really sounded and looked so amazing. I was so excited for it. Sigh.

But I must say that I am disappointed by it. The only stories I truly loved were by Beth Revis and Marissa Meyer. And even those were way too short, just like everything in this book. I'm disappointed. I thought there would be a lot of badass girls, with amazing stories. But there weren't. Not at all, not really.

I mean, sure, most of the girls are pretty amazing. But just about every single story had something awful happen to them, or someone close to them dying, or them dying themselves. And I just. How is that being badass? It bothered me. I expected much more. And felt like I got so little. Sigh. The writing in the stories were amazing, at least, so I'm pleased about that. And despite liking many of the stories, I was disappointed by most. Giving this one three stars, mostly for Marissa and Beth. I'm also going to be rating each of the stories below, and writing a little bit about them as well. I just, I'm a bit sad, because I really wanted this book to be epic. Sigh. I think what bothered me the most was how short every single story was. Annoying.

The first story was Mother Carey's Table by J. Anderson Coats. Set in 1710. I'm giving this story 3 out of 5. This girl was a pirate, pretending to be a boy. I liked her relationship with her dad. Though so short, so didn't get to see too much of it, sadly. I liked her life on the ship, though once again, very short. I liked it, until she tried to help them all, and they learned she was a girl. Ugh. She helped them all in such an amazing and painful way. But it did not have a happy ending. Disappointed. Could have been more.

The second story was The Journey by Marie Lu. Set in 1723. I'm giving this story 4 out of 5. I liked this one a whole lot. There is dog sledding. Awesome girl. I liked getting to know her a little bit, and reading a tiny bit about her life at her small village. But then strangers arrive. And both her parents died in the beginning. Which disappointed me. She goes to find a new place to live, which was so interesting. But she is alone the whole time. I felt like story ended right when it began. I wanted much more from this.

The third story was Madeleine's Choice by Jessica Spotswood. Set in 1826. I'm giving this story 3 out of 5. Gosh, I'm unsure. Girl was in love with a boy she danced with. Parents wants more from her. Her best friend betrays her. Was disappointed. But I liked it. The fourth story was El Destinos by Leslye Walton. Set in 1848. I'm giving this story 2 out of 5. About the three Fates. They are sisters. It was a bit poorly written. Main girl in love with boy sister marries. A bad ending, sort of. Could have been interesting.

The fifth story was High Stakes by Andrea Cremer. Set in 1861. I'm giving this story 3 out of 5. This girl was awesome. She has a power, with snakes. But someone close to her dies. A boring game. Sigh. Good ending, sort of. But was too short. The sixth story was The Red Raven Ball by Caroline Tung Richmond. Set in 1862. I'm giving this story 2 out of 5. It all takes place during a ball. Ugh. No boys. About a spy, yet boring. Grandma was awful, sister was, well, a bit mean. Didn't like this one. Shrugs. Just, boring.

The seventh story was Pearls by Beth Revis. Set in 1876. I'm giving this story 5 out of 5. At first I was a bit unsure, because the story starts with the girl having been raped. Which is heartbreaking. But it doesn't focus on it. And this girl is so strong and sweet. She is being forced to marry that awful man, and so she runs away instead, to teach a small school. It was amazing to read about. My heart ached for this sweet girl. And I loved getting to know the kids, like Annie. Ending was good, but way too short.

The eight story was Gold in the Roots of the Grass by Marissa Meyer. Set in 1877. I'm giving this story 5 out of 5. It was simply amazing. I loved reading it so much. But heartbroken that it was not a full story. The girl was incredible. She can talk and see ghosts. I loved reading about it. She is trying to help a boy that just died, James. And it was so interesting. The ending is sad, sadly, yet I found that I loved it a whole bunch. It was sad, yet the most happiest too. I really want so much more from this story. Ack.

The ninth story was The Legendary Garrett Girls by Y. S. Lee. Set in 1898. I'm giving this story 3 out of 5. Two sisters run a bar alone. They were awesome to get to know. Bad guy is taking it over. I loved how they dealt with him. A bit sad ending, though. I wish it had been longer. The tenth story was The Color of the Sky by Elizabeth Wein. Set in 1926. I'm giving this story 2 out of 5. Girl gets to see the first black woman to fly. Someone dies. She attends the funerals, travels far. It was boring and I didn't care much.

The eleventh story was Bonnie and Clyde by Saundra Mitchell. Set in 1934. I'm giving this story 5 out of 5. This story I loved a whole bunch, I think. I'm just so heartbroken that it was so short. It makes me sad. This story deserves to be a full book. I want it to be. One day, I hope. It is about a girl robbing banks as a boy, because everyone is poor. She is sharing the money. She's dating Caleb, whom seemed awesome. But he's trying to catch her as the boy stealing. The ending was good. Just, way too short.

The twelfth story was Hard Times by Katherine Longshore. Set in 1934. I'm giving this story 4 out of 5. I liked this one a lot. Poor girl traveling with a boy. Talks to young reporter man on train. Ends hopefully. I ship them. Just, I wanted and needed more. Sigh. Should been longer. The thirteenth story was City of Angels by Lindsay Smith. Set in 1945. I'm giving this story 2 out of 5. Gosh, so boring. Whole book was about girl falling in love with another girl. I felt nothing. She is a writer. Other girl is a liar. Disliked it.

The fourteenth story was Pulse of the Panthers by Kekla Magoon. Set in 1967. I'm giving this story 2 out of 5. About the black panthers. Interesting, too short. Innocent farm girl. A small romance could have happened, quick ending. The fifteenth story was The Whole World Is Watching by Robin Talley. Set in 1968. I'm giving this story 2 out of 5. Boring. There are protests, sort of interesting. Don't get why girl joined. She is in love with a girl, but being with a boy to show her father. Cheating. Did not like. Sigh.

This book was a bit of a mess. I loved the writing. I loved a few of the stories, but most of them were just meh. Nothing special at all. They were all too short, most were not exciting at all. I just wanted this book to be over at all times. Sad face. But still giving it three stars, because as I said, I loved a few of the stories. But mostly this book was not that good. I did love the author notes at the end of each story, though. I liked that it was a really diverse book. Just wished that the stories had been told better. Sigh.