There is a few series that I love. And one of them is The Walking Dead. I wanted to do a blog post about it, because I haven't done any reading for a while now. And I just finished re-watching season one and season two of The Walking Dead. Season three have just started; with episode 2 out. I'm thinking that season three will be the best season yet :) I'm blogging about this amazing series because I need you all to start watching it ;) But if you don't like a lot of graphic death, then you should not watch it. Because be aware that there is zombies in this show. And lots of death. And blood. And guts. It's awesome.

I actually enjoy horror and death. And The Walking Dead isn't just about zombies eating people. There is a lot of main characters in this show. We get to know them all. Well, most of them :) Some characters I really loved, some I really hated. Will talk a bit about them soon. This series has an amazing plot line. I won't spoil anything. Just a few little things. The Walking Dead is about zombies. They are suddenly everywhere. They hunt by sound, and if they bite or just scratch you, you will turn into one yourself. There is a lot of dead people in this show. I loved it. I'm just weird like that ;p

A lot of things happen in these 21 episodes so far. There is so many deaths. So many people who get eaten. It's bloody and quite graphic. But I did like it. Because it isn't really that bad. And the plot line really is amazing. And the characters make it worth it, in case you do mind all the death. Things happen in each episode. And I must say that the story is perfect. Well, okay, I might not have loved Lori and Shane at all. But they did need to be there, in a way. Made some drama. Who I did love, however, was Daryl. He is totally amazing. A bad boy. At first he's such an asshole. And I kind of loved that. But he does change. A bit. Maybe. I guess we'll see later on :) Either way, he is perfect.

I have mixed feelings about Rick. I think he is an amazing character, and I did love seeing stuff about him. I just didn't like that he let himself be pushed around so much. Not fair. Another character that I loved was Glenn. The Asian boy. He's perfect. So kind and amazing. He's a perfect character. Loved seeing him. We must get to know him more this season. We must. I also kind of liked Andrea. But I did love Carol. Felt so sorry for her most of the time. But she's strong. I liked her. I hated Shane. More than anything. He got lots of people killed. He put them at risk at all times. He was such an asshole. There is too many characters to talk about. So I'm not going to. Just trust me; you need to watch this series.

The Walking Dead is an amazing show. You need to watch it. Right now. You really do. I'm pretty sure you will not regret it at all :) It is a bit heartbreaking, though. Okay, very heartbreaking. But it's perfect. There is so much death, but there needed to be. It is all so amazing. I'm not sure what else I can say to convince you to watch this series. You just must. Promise. The characters are likeable, for the most part, and the story line is perfect. You will fall in love. Like I did. The Walking Dead is based off comic books. I just peeked at them today. Some characters are the same, some are not there at all. Different plot, in a way. Like every book-to-film adaption :) I would suggest watching the series ;p 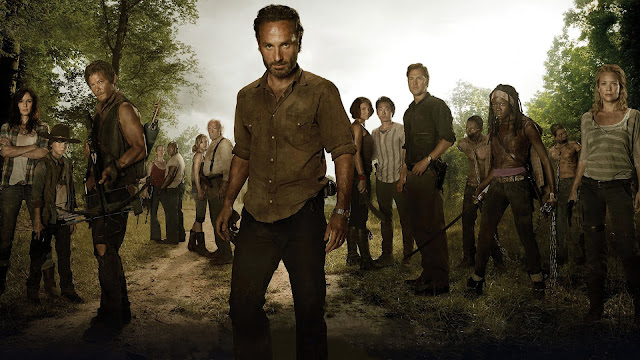