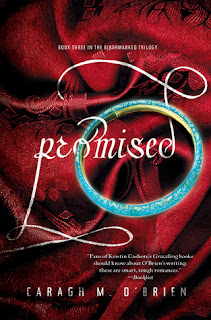 I'm still confused about my feelings for this book. But I'll try my best to sort it out. I loved the first book; Birthmarked. I kind of hated the second book, Prized. I disliked Promised as well. I mean, I loved the plot very much. And the writing. And I adored Leon. But I could not stand the main character, Gaia. Which totally sucked. I loved her in the first book. But then she was like a different person in book two. She wasn't any better in this one. I just don't get how she could change so much. And I didn't like it at all. Sigh. I'm sad about that.

Just giving you a fair warning. This review won't spoil the first two books that much, cause I won't talk plot, but I WILL be spoiling a lot of things in this book. I must. I cannot imagine talking about this book without spoiling things. I need to mention them. And hate on them. And gah. I'm sorry. But this review won't be very positive. Even though I'm giving it a three star. I don't have many positive things to say about this book. Except for Leon. Will talk some love about him, I think :)

I won't say much about the plot in this book. Just that it continues with what happened in the first two books. We see a confrontation of the "New Sylum" and the "Enclave." I did like that. For the most part. A few things felt rushed. But mostly liked it :) It needed to happen. Took long enough :p What I disliked from the first page was that a whole year had passed since the second book. I didn't approve of that at all. Because I hated Gaia for how she treated Leon in the second book. She NEVER made up for it. Ever. And especially not in this third book. And that is my biggest issue with book 2&3.

Because I really liked the plot and the writing. I really did. Hence the three star rating. But I hated Gaia. And I'm sad that I did. Because I really did love her in this first book. Promise. But once the second book started she was a new person. So different. And cold. And hurtful. And selfish. And cruel. I did not like her at all. She didn't improve in Promised. She had a few good scenes, but there weren't many and they were far apart. I'm just so disappointed in her. Kind of ruined the series for me.

But while I hated Gaia, I loved Leon. The love interest. Well, in book two there were three love interests. Which is one of the reasons for why I hated Gaia so much. But Leon. Leon is perfect. He is very broken, he's had a tough upbringing; even though he was rich with a big family. They were cruel to him. And it made him such a perfect person. Only, we don't get to see that much. Because Gaia don't care. At all. Well, okay, she claims to love him. I don't believe her. Cause she doesn't show it.

Leon deserves so much more. But he wants her, for whatever reason. So I just wanted him to be happy. And he is. But it isn't perfect. I wish it was. Anyway. Leon is an amazing person. Kind, loving, sweet and protective. He's the perfect boyfriend and person. Just wish Gaia had seen that. Sigh. She doesn't treat him well. Doesn't listen to him. Doesn't try to make him happy. Don't seem to care for him at all. Especially at the end. She just cared for her own needs and wants. Gah. Do not like.

There were some interesting characters in this book. Some I liked. Some I hated. Felt like we saw too little of them; wish the book had been longer with more characters. And more Leon. The thing I hated in this book was when Gaia's ovaries were stolen. It was fucking sick. And I can't believe the author did that. I'm sure some will like it, maybe. But I hated it. Now Gaia and Leon can never have children. Ever. It sucks and it's heartbreaking and it did not make sense. Goddamn it. Don't get it.

Ah. I'm just so upset about this book. So much that I didn't like happened in it. No caring for Leon. Fucked up plot thing happening near the end. And just generally disliking Gaia. But I liked the story. And the writing. And I loved and adored Leon. So it's a three star for me. This review is shorter than normal; I just don't have more to say. You should read this book if you have read book one and two. :) Haven't read any in the series? Just read book one. And not the sequels. Sigh. Still. Promised was good. Also, a bit unsure about the ending. It was heartbreaking, and I kind of want more. But I still liked it.

Goodreads - Buy it
Posted by Carina Olsen at 9:10 PM