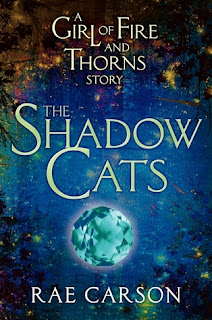 The Shadow Cats is a prequel to The Girl of Fire and Thorns. It is from the point of view of Elisa's sister, Alodia. It is written very well, and the short story is very likeable. It is short, though. Just about fifty pages. I wanted more. So much more. Because I loved Alodia. And I really enjoyed her point of view. I just want more of her. Plus, this short story has more live-action than the first two books in this series.

I do not want to spoil this short story. But I do want to talk about it. So I'm going to do that. Hopefully I won't spoil it :D Won't say how it ends, what happens at the end, etc. But will discuss plot and characters. The Shadow Cats is about a shadow cat. In a way. A jaguar is terrorizing this town close to their kingdom. The people living there think it may be responsible for the grass not growing, flowers not blooming and all that. And then Alodia and Elisa shows up there for a wedding.

And I must admit. I kind of found Elisa to be annoying. And I liked Alodia more than Elisa. But that might be because Alodia doesn't like Elisa much. But while reading this ebook, I got to understand Alodia so much more. I got to care for her. And she does love her sister. I truly believe that. But I also understand why she's angry with her, and why she dislike her a bit. She's also jealous. I would be too, I think. I still enjoyed it, though.

And then there is Alodia herself. She seems like an amazing person. And I want more of her. It's why I'm giving this book a four star, to be honest. Because it was too short. Wish it had been longer, with more of the story and more of Alodia. She isn't much in The Girl of Fire or The Crown of Embers. Anyway. Alodia is pretty special. Many people overlook her because of her sister's god stone. But Alodia is their princess. To be their queen one day. And I do think that was an amazing choice.

I could talk forever about the characters. But I won't. There is many remarkable people in this book. Like Alodia's steward, Zito. While this is short, we managed to get to know him some. And I loved that. Nothing romantic at all, but I still loved him. And god. How sorry I felt for him at the end. Broke my heart. But also made an awesome story, so I kind of liked it. Maybe. Still. So sad and awful.

The plot in this ebook is pretty amazing. It isn't long, and I wished it had been longer with the plot being even more amazing and we getting to know more of the characters. Sigh. I hope Rae writes from Alodia's point of view after finishing The Bitter Kingdom :) I really want that. Not more to say about this. Just that it is awesome. And if you have read this series, then you must read this prequel :) Because yeah, it is amazing. And I do think you would all love it. :)

Goodreads - Buy it
Posted by Carina Olsen at 9:45 PM