Review: The Spindlers by Lauren Oliver 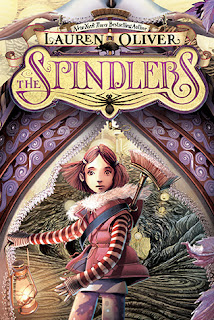 I love middle grade books. Find them to be amazing and well written. This is the second middle grade book by Lauren Oliver that I have read. I adored her first MG book; Liesl and Po. It was perfect. And I knew I needed to own The Spindlers when it released. The cover is gorgeous. And I liked the summary a lot. And now that I have finished it, I can say that it is amazing. Not perfect, but extremely good and very well written. With amazing lead character girl, and other great characters.

While The Spindlers is not as perfect at Liesl and Po, it is still perfect. It is written really well, and the characters are likeable. I did like the world Lauren has created for this book. But some things did confuse me, and was a bit too much Fantasy. But I still enjoyed it all, for the most part :D And even though I found a few things a bit silly, I still loved reading about it all. Even the big female rat wearing clothes and make-up. Even enjoyed the Spindlers. The creepy creatures. I will be sharing a few details about it all :) It really was a great book. So sweet, as well.

The main character in this book is Liza, and the whole book is from her point of view. I liked that. Liza is a young girl living with her younger brother and mother and father. Then one day she wakes up and her brother is different. Not himself. Still looks like him, and remember everything about him, he just doesn't act like himself. Liza knows right away that his soul has been taken by the Spindlers. Taken Below. She knows this because her old babysitter Anna told them all about them. About the creatures living below them. And I actually liked that :) I do enjoy fantasy books.

Liza decides to go get her brother, Patrick's, soul back. This is where the journey begins. I won't say all the things that happen. Will mention a few things, though :) A few characters ;p While going Below, Liza meets someone. She meets a rat. A female rat almost as tall as she is. This rat is named Mirabella. She's not like other rats; cause she wears clothes and make-up. And she stands on two legs instead of four. She is a weird creature. But also pretty awesome. I did like her. Even though she was annoying most of the time, and I disliked her for a bit near the end. But she was pretty awesome :)

We get to see so many creatures in this book. I did like the Spindlers. Even though they were awful and creepy and a bit scary. They were really interesting :) Then there were the Scawgs. Wish we had seen more of those. Even though they did seem a bit worse than the Spindlers. In my opinion, at least ;p I did like what we did get to see about them, though. Cause they were pretty creepy and awful. But also so fascinating and interesting to read about. One of the highlights of this book ;)

Also liked reading about the nocturna. They were a bit weird, but I also liked them. Because they were special. The plot in this book is special. And unique, in a way. Even though it does remind me of many books. But I really didn't mind that. Because for one, this is a middle grade book. No romance. And a non-complicated main character. Sort of. And the creatures in this book were special and unique, and I did love them all. Pretty much, at least ;p Anyway. I liked the story in this book.

I'm not really sure what else to say. I don't want to spoil this book. Just know that I liked the characters a lot, and the writing, and the story. And I did love the ending. The book is a bit short, and I wished it had been longer. But I was also happy with what there were. I think you should read this book. But you should be liking middle grade books :) Haven't read MG yet? Then you must start with Liesl and Po by Lauren. <3 It is so good. Best middle grade book I have read so far :)

Goodreads - Buy it
Posted by Carina Olsen at 9:04 PM