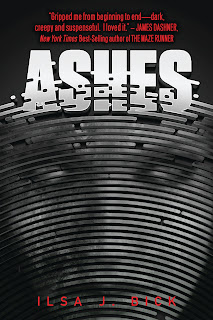 I had been wanting to read this book for months now. But because I read some negative reviews I didn't read it right away. I sort of really regret that now. Or, well, I also regret reading it already because I do not know how I will survive the 100+ days until the sequel. I have no patience. And I need to know what will happen RIGHT NOW. Plus, it ends so so so bad and I have no idea how it will get better. Sort of.

A lot of people are saying the last 200 pages of this book was bad. At first I agreed. Then I thought that it was better. Because I liked this one character a whole lot; much better than a character in the first part. Getting to that soon. :) Anyway! I loved this book. The writing is really good, and the story is sort of unique, and the characters are great. For the most part.

Ashes reminded me a lot of the show The Walking Dead. But it isn't really the same. It has some things that are the same, but I didn't mind. I love them both. The "zombies" in this book also reminds me of the rabids in The Immortal Rules; but not as awesome. Still enjoyed these, though :D Because they aren't usual, and they are pretty interesting. And horrible.

The plot in this book is so good. It starts out normal; well, sort of. There is the main character, Alex. I got her confused for a guy many times :p But that was just me. With the name. She is most definitely a girl. :) She is a unique character. And I loved her. She is sweet, well, sometimes. And she is kind. If she has reasons to be. And she is strong. She is out in the mountains to "set free" her parents ashes.

And I sort of think that is why this book is called Ashes. Because of that. It has some part in this plot. But still not really getting the title for this book. There are no ashes in Ashes. Still, though. I do love the title. :) Anyway. Alex is in the mountains. She is also sick. She has a huge brain tumour, and it is horrible. She has lost all smells and tastes and memories. But then something happens.

There is a "zap." And everything starts hurting in Alex; almost like she's dying. And the animals are the same. And some other hikers she had met. Then it passes. The guy besides her is dead. But not the 8 year old girl. And Alex is forever changed. Well. Probably. Most likely. Her smell and such are back. And it is awesome. Because her sense of smell is a lot stronger; it is a bit weird. But I loved it.

Anyway! Not sharing much more about the plot :D Well, a little very soon, but will say it's a spoiler. I really loved the first 200+ pages of this book. Alex teams up with this little 8 year old kid; Ellie. And omg. I sort of really hated her. She was a total ass, and she made things so bad for Alex. But. I also couldn't help but like her. Well, later on. :)

Alex wasn't the only one who changed in the zap. A lot of people died. Most people died. But many changed. They became zombies. Well, a version of zombies. And they started eating people! And they can smell people. And it really creeped me out. But I also loved it, because it made the story so good.

Alex and Ellie are doing everything that can to survive. But it ain't easy. Then, when they are almost dead, they meet Tom. It is horrible the way they meet. It was not good. But it was also sort of awesome. Tom is an interesting character. I know I was supposed to love him. And I sort of did. But not enough, I think. And especially not since Alex didn't share her secrets with him at all. :p

But he was a great character. He was strong and smart and kind. And now is the time where I start telling SPOILERS. Because it would be a mistake to like Tom. And Ellie. Because they disappear. They are there for the half of the book, then they are gone. In a horrible way. But also beliveable. I just didn't like it at all. They aren't dead, probably not. But they aren't there, either.

And in a way Ashes is two books. The first part, and the second part. But not really, either. Since it is the same main character and the same plot. Just a few different characters. At first I was really pissed. But then I started loving the second part. It is a lot different from the first part. Because Alex is alone. But she is also in a new place with lots of people. And it's weird. But so good.

She is in Rule. And Rule is a fucked up place. So many weird things going on there. It seemed horrible. The thing I loved about it, though.. was Chris. And I didn't think I would enjoy a love triangle. At all. But it isn't a triangle in this book. Probably in the next; and I will hate that. But in this book it isn't. I think she feels more for Chris. Because she fits together with Chris a lot more.

And Chris is amazing. He is a lot different from Tom. But to me, he was a lot better. We didn't get to know Chris a lot. But then, we didn't get to know Tom either. And I liked Chris the most. Chris is sweet and kind, and handsome. He is full of secrets. And I loved that. He is also sort of dark; which I really loved. I felt sorry for him a lot, though. Because Alex was being difficult. Still.

I want Chris and Alex to be together. And they do kiss. And it is so good. And I loved it a whole lot. But then some really horrible things happens; and then it is ending. And I couldn't believe that ending. There are betrayals. And I'm hating on Alex for not listening to Chris. And I have hope. But I also don't, because the ending is cruel. Really cruel. But since it is a trilogy; I'm not very worried. :)

Also, it will be so interesting to see what will happen next. I cannot wait for the sequel. Wish I could have it right now. <3 I needs it. Like, really need it. Anyway. I loved this book. The writing is perfect, the plot is so interesting and so good, at all times. And the characters are mostly amazing. :) There are a lot of characters in this book; only mentioned a few. But loved a lot. :)

Anyway. I think you should all read this book. Because it is amazing. It really is.

Goodreads - Buy it
Posted by Carina Olsen at 8:55 PM