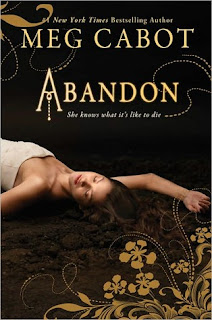 I have had this book for quite some time now. Have wanted to read it a lot of times; but have been worried that it would be too heartbreaking. It sort of is, but in a weird way; so I shouldn't have been worried at all. :) Gonna read the sequel next. But I didn't really like this book much, either :\ I wanted to. And I did enjoy the plot and somehow liked the characters. The writing just wasn't for me at all.

You see. I thought this would be an epic mythology/fantasy/paranormal book. Well, it isn't. It is mostly just another high school book. It isn't very long, but to me it focused too much on the whole school thing that what was supposed to be the actual plot. I'm sure some wouldn't mind it at all, but I did.

I wanted it to be amazing, and I wanted to love it. But I couldn't. I couldn't like it because of the writing. It isn't much of a book, in my eyes. It's more like a journal. A not good written journal. I didn't understand much of the things that were written; because most of the time it didn't make sense. And I understood all the words; just not the way they were put together :\ Plus I didn't enjoy the time thing.

See, the time is really weird in this book. I have no idea what happened when. It is supposed to be two years since Pierce nearly died, yet near the end they say one and a half year. And it is so confusing in all of the book. It confused me a whole lot. I'm sorry if this review will be a bit negative, it's just the way I felt about it and I like being honest about my feelings about books.

But I did like the plot. If only it had focused at the plot at all. Because it didn't. Didn't think it was done well, either. It could have been awesome. But it was just "too much" only nothing really happened, but according to the main character so much had happened while nothing really did. The plot centers around Pierce and her short death. Were she goes to the Underworld.

And it is just weird. Because it could have been so good; and that is depressing. She was with John there; and I didn't understand why she was so overwhelmed with things, because those small things didn't really matter at all. And also felt like John's reaction towards her was overdoing it a whole lot. I could have understand it if it had been written well. But it wasn't. And I didn't get it.

Plus Pierce acted like a total bitch the whole time. She is always crying in this book, and it didn't feel real to me at all. Then two years pass and she keep thinking about "him." And it is all so weird. Because he wasn't cruel and mean to her like she keeps thinking. And she's obsessing about it too much; in a negative way. Gah. I just didn't like it :(

Then there was that whole High School issue thing. I'm getting so sick of reading about high school. Can't really blame this book for that though. But this book WASN'T supposed to be a high school drama book. It wasn't. So disappointed in that. Plus there were these weird characters I didn't like.

There is the main character; Pierce. And I sort of liked her. But she was a bit of a nutcase. Didn't love her at all. She does so many stupid and dumb things; and I just didn't like it. I did like John. But not much. Didn't love him. He could be awesome, but we didn't see him much and it wasn't written in a good way; at least not for me. Wish it had been, though.

Pierce has had bad things happening to her. But it didn't really feel bad at all because it was sort of weird. And I'm sorry for saying that, but I just didn't enjoy it. And I'm hating that I didn't :p But. I am excited to read the next book; even though I know how it ends ;p Still excited though.

Anyway! I'm sorry for this sort of negative review. And I had a few issues writing this review; because it was hard for me to get my thoughts together. I just didn't like this book much. Had lots of issues with it. But I am glad I read it. For the most part. :) It is an quick read, but a bit boring at times. Still, though. It is an interesting book; and if you think it would be for you you should give it a try :)

Goodreads - Buy it
Posted by Carina Olsen at 8:36 PM