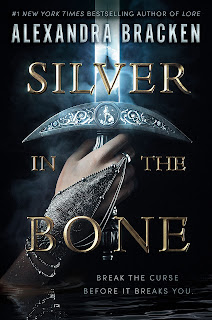 SILVER IN THE BONE BY ALEXANDRA BRACKEN

#1 New York Times bestselling author Alexandra Bracken cements her status as one of the top fantasy authors writing today in this stunning series opener inspired by Arthurian legend and fueled by love, revenge, and pure adrenaline!

Tamsin Lark didn’t ask to be a Hollower. As a mortal with no magical talent, she was never meant to break into ancient crypts, or compete with sorceresses and Cunningfolk for the treasures inside. But after her thieving foster father disappeared without so much as a goodbye, it was the only way to keep herself—and her brother, Cabell—alive.

Ten years later, rumors are swirling that her guardian vanished with a powerful ring from Arthurian legend. A run-in with her rival Emrys ignites Tamsin’s hope that the ring could free Cabell from a curse that threatens both of them. But they aren’t the only ones who covet the ring.

As word spreads, greedy Hollowers start circling, and many would kill to have it for themselves. While Emrys is the last person Tamsin would choose to partner with, she needs all the help she can get to edge out her competitors in the race for the ring. Together, they dive headfirst into a vipers’ nest of dark magic, exposing a deadly secret with the power to awaken ghosts of the past and shatter her last hope of saving her brother. . . .
Hardcover, 480 pages
Expected publication: April 4th 2023 by Knopf Books for Young Readers
Pre-Order: Book Depository and Blackwells and Amazon

Oops. I'm a little behind on books by Alexandra. Despite owning a bunch of them, ha :D Still excited for this newest one, though. <3 And will be getting it :) I think the cover looks stunning. Sounds so good too.
What are you waiting for on this cursed Wednesday?
Posted by Carina Olsen at 6:00 AM