Review: A Breath of Mischief by MarcyKate Connolly 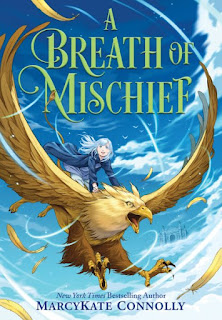 This cover is just too beautiful. I can't stop looking at it. I have been excited about this book for ages now, as I have adored MarcyKate and her books since her first one came out years ago. She always gets the best covers, ha. I was lucky enough to win a personalized ARC of this precious book, out next April.

I could not help but read it right away. It was such a quick and easy read. And I liked the story a whole lot. But I sadly did not love this book. I am giving it three stars. I found it to be pretty much adorable, with a few small faults. Will share a bit of this tale, but not too much. I highly suggest you all read it, though.

A Breath of Mischief tells the story of Aria, a young girl who live in the skies. She is a child of the Wind, an otherling. Aria have the power to float, and she does not really look human either. She has always lived in the skies with the Wind as her parent. With her friend, Gwyn. Whom is a young gryphling. Which was such an awesome creature. I love everything that flies, ha. And reading about Aria and Gwyn was pretty fun. I loved how great friends they were. This is a story of how the Wind suddenly disappears. And how this affects their whole world, not just Aria personally. She goes on an adventure to get the Wind back. Where she learns that the Wind has been captured, and she needs to go on a quest to find special treasures to get her Wind back.

I shall not say too much about what happens in this book, as it is short, and I don't want to spoil it all. But Aria makes some mistakes along the way of freeing the Wind. Which were a little obvious, but she was a bit too naive to realize that. And all she truly wanted was to get the Wind back, so she did not really care about anything else at first. It's a story about the elements, the Wind and the Water and the Earth and the Fire. We get to read a little of each, as they all have an otherling like Aria, for each element. I did like that.

Aria had always been in the skies, loving her life there. When the Wind was taken, she was forced to the ground, no longer able to float. Her castle of clouds falling down. She learned much more about the world during her days on the ground. How evil some men could be, how kind some women could be. She got some friends too, the other otherlings. We learn only a little about them, but I liked getting to know them too. Especially Bay of the Water. Wanted to know more about him. Enjoyed reading about Aria exploring.

This book was short, and everything happened fast. It was about Aria trying her best to save the Wind. Going on a quest to find three items, which was dangerous for her and Gwyn. I liked reading about the dragons they met. The reason this was a three star for me, was because I had issues with the writing. It felt awkward most of the time and I just did not manage to get lost in it. Which made me not care much about Aria either. But I did like this book a whole lot, even so. It did feel magical. A great small adventure.

Goodreads - The Book Depository - Blackwells - Amazon
Posted by Carina Olsen at 12:30 AM