Review: Upon the Flight of the Queen by Howard Andrew Jones 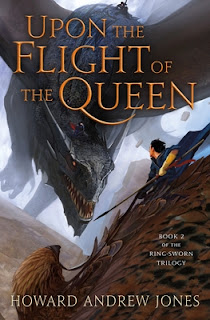 I had a small hope that this second book would be better than the first one. That things would have been improved upon. This was very much not the case. Sigh. The writing was even worse in this one. I tried to get used to it. Which was fully impossible, as every single written word bothered me most. It was never good.

Which does break my heart a bit. As I had wanted to enjoy these two books a whole lot. Instead I spent ages reading two books I did not like at all. Sigh. But I did it. I read them. I gave them my best shot, but these books were very much not worth it. I will not read book three. Curious, but I would not go through this again.

I wish I could say that this book was good. That it was a sequel better than book one. But it was so not. The writing was just as horrible as it was in the first one. There were still too many silly descriptions of every single thing. It was impossible to focus. It grew boring so very fast. And I still do not care at all for these characters. Sure, they were interesting to read about at times, but no love for any of them. There was no romance. Instead it seemed like they all wanted to sleep with each other which they just didn't do. And the author seems to have set it up that Elenai could be with any of the male still alive in this book. Ugh. It was all simply too much. Yet not nearly enough to make this a good book. I sadly found a lot more faults than good things.

One of the worst things about the writing in book one was how every woman was beautiful with small waists and wide hips and their hair was described as manes. All of this still happened in book two. Ugh. The only women that weren't beautiful were the old ones. Or Varama, the only character with blue skin. She wasn't thought of as beautiful either. Of course. Every woman are slim. Slim body, slim eyebrows. And then there was that every single male in this book was so handsome and full of muscles. Hahaha.

Then there was the character of Vannek. I do not think this character was done well at all. It felt silly and not written well at all. Vannek is a woman, but was told by her father that she was to be a man, so now everyone is to think of her as a man. She thinks of herself as a man. Well, not really. There were writing mistakes all over, when Vannek thinks of herself as she, when it is always he. This character was simply not done well. Vannek wasn't sure what she wanted to be. It was only confusing and had so many faults.

The character of Vannek could have been a great representation. But it was not written good enough for that, at least that is how I read it. Which is highly disappointing. Honestly, I could go on and on about how this writing was the very worst I have read in a long time. But I shall not write much more about this, as it bothers me beyond words. One thing that was written all the time was the phrase "on the instant." Which made no sense and was beyond distracting to notice at all the time. This should have been edited more.

And oh gosh. I almost forgot about a quote I have saved from the book. I mentioned that it seemed like the main character, Elenai, could end up with any of the males. This quote is from when she sees one of them working out shirtless, it's her thinking. "Who wouldn't be attracted to such a finely controlled physical specimen?" And gosh. It killed me a little reading that. This entire book was pretty much horrible. Writing was the worst. The characters not really likeable, which was disappointing. As there were many of them.

But I still kept on reading. Because I got these two books for free to read and review. And so I felt like I needed to finish them. Okay, I did not truly need to, but I decided that I would. It took forever to read them both. And I do not feel any better having finished them. They were so completely not worth reading. But I will say that it is a two star because the plot was not all awful. Most of it was not very good, but some of it were interesting. And I wanted to know more about a few certain things, like the creatures and the magic.

But this was sadly not enough for me. Not enough at all. Bad writing can never make me enjoy a book. And this book had bad writing from beginning to end. I feel a little sad about it, but these were not good books. And I have to be honest about how I feel. I didn't mention any of the plot in this second one. And I'm not going to. Only sharing my thoughts about it, which I have done. And honestly, I would really not recommend that anyone read For the Killing of Kings and Upon the Flight of the Queen. Not ever, sadly.

Because even though the plot was good at times the writing would simply never make these books worth suffering through. Which I did. Ugh. Huge thank you to the publisher, St. Martin's Press, for sending me a free finished copy of this book to read and review. I wish I could have written more positive reviews, but also not, ha. Because these books were not good. Sure, some will like them, but we are all different. And to me, these books were nothing special. I simply wish that they had both been more. More of everything.