Review: For the Killing of Kings by Howard Andrew Jones 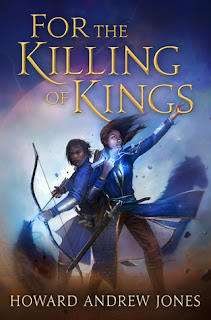 I was lucky enough to get book one and two in this series sent to me for free from the publisher. Which I'm so thankful for. I wanted to give these books a try, as the covers are pretty, and the story sounded interesting too. I do not read a lot of adult books, but as this was fantasy I decided to give it a chance. I sort of regret that.

Which is all kinds of heartbreaking, to be honest. I really wanted to end up enjoying these books a whole bunch. But this first book was such a struggle to read through. I hope I will have more luck with book two, but I'm not sure about that. Either way, though, I'll read the second one as well. And I truly hope that it will be better.

The thing is, this book was not really all that bad. The story was pretty interesting. These characters were somewhat okay. I liked learning more about this world as I found it to be pretty good as well. But there was simply nothing that could save this book from the writing. The writing really needs to be good for me to enjoy a book. And in this case, the writing was well and truly awful. I kept hoping that it would improve. That I would at least grow used to it. But it did not and I did not. It was simply not good writing. At all. There were way too many descriptions about everything, all the time, and not done in a good way. It made me forget about what I read as I could not focus. Which is so not a good thing. Sigh. All I wanted when reading was for it all to finally end. Ouch.

I wish this had been a fast read. It was not. The pages had small script as well, meaning the bad writing never ended. And I had to focus even more just to read the words. Ugh. I did try to get used to it. But I never did. And to make it even worse, a whole lot of the book was from the point of view of a man less than thirty years old. He thought about sex a lot. And every female he saw had soft eyes, small waists, wide hips and swayed when they walked. Hahaha. It was all kinds of gross. And it never ended. Yuck.

Oh, and he also commented on their mane. As in, their hair. So weird and such bad writing. I'm unable to mention it more. As I want to stop thinking about it right away. The writing was simply not good and that is all. Because of this this book is a two star for me. I did want to know what happened next to all of these characters, but I never loved them. And I wanted the book to end because I could not stand reading the writing. I wish it had been better. But it was not. I hope it will have improved by the second book, though.

I'm not even sure where to begin with describing this book. It is set in the past, everything seemed middle aged. But then there was also the one time the queen mentioned the word awesome. Yeah. That did not fit in at all with the fantasy world. It was simply weird. But despite that, I found the world of this book to be somewhat interesting. I enjoyed learning more about it. There are creatures in it, though described badly, they were interesting to read about. It's a world with magic. Well, very small parts of magic. Wanted more.

The book begins with the point of view of an old guy. Which was all kinds of boring, to be honest. They are honoring the death of his friend, much younger than him, that died in battle seven years before. Then this old guy finds out that the sword they have for him, locked up, is not the real sword. And he is killed because of his suspicious that same night. It could have been told much faster, though. This whole book could have been faster. As there were much time where nothing happened. Much should have been cut.

The old guy was teaching squires to become full soldiers. Which was important in this world. One of the squires were twenty five year old Elenai. She learns of his death the day after and becomes entangled with another soldier, Kyrkenall. They have to flee after killing a few people. And so this is a story about them being on the run while searching for the truth about things in this kingdom. There were a lot of plot things and secrets. Some of them were kind of interesting to read about, but nothing was special, sadly.

I do not feel like describing the plot of this book. It is the story of Elenai and Kyrkenall. Then the story of some others too, which includes the man with sex on his mind. I somewhat liked him, if it weren't for the bad writing of him, ugh. The magic part of the story was interesting too, though I wish it had been more, to be honest. And gosh. The names in this book. I thought I would get used to them. I never did. Because they are impossible to pronounce for me. Which only made me dislike this book even more, sadly. Sigh.

I wish I could have loved For the Killing of Kings. But the writing made me almost hate it. But I did not fully do that either, and so it is a two star for me. I'm sure there are others who will love this story. But I wasn't one of them and I would not really recommend this book to many people. Though I'm so curious to know what you would all think of it. Huge thank you to the publisher, St. Martin's Press, for sending me a free finished copy of this book to read and review. I wish I could have enjoyed it more, but it was impossible.