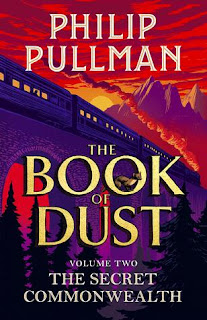 I do not know where to start. I have waited years for this book to come out. To know more about Lyra, now age twenty. But then it was out. And I learned all the spoilers. And I knew there would be parts of this book I was going to hate. But despite that, I still did my re-read of His Dark Materials, which I still love beyond words.

And I re-read La Belle Sauvage, which I also still adore so much. But then I had to read this new book. And I wish I could say that I loved it so very much. But I did not. I knew I would not, but it still hurt my heart so very much. I had waited so long for this book. I had imagined so much. I thought it would be perfect. I was wrong.

There is so much I have to say about this book. First, I'm giving it three stars. Which I think feels fair. The writing was still gorgeous. The world is the very best. Just reading about the old characters gave me joy. Which is why it is as much as three stars. Because the plot and story was not worth that much at all. Okay, fine, the story was exciting and I wanted to know more. But parts of it were simply not okay. And I have so much I need to write down. There will be spoilers below. Because I can't write about this book without writing about what was wrong about it. And there was a whole lot of wrong with this book. Ugh. I wanted to love it the most. I so did not. I still have hopes about the third and final book, but I'm also certain that my hopes will be crushed. Again. Sigh.

Where to begin, though. I hope I will remember to write down everything I want to. This book is written from many point of views. First there is Lyra again, now twenty years old. It has been eight years since the ending of The Amber Spyglass, since she left Will in his own world. There is also the point of view of her dæmon, Pantalaimon. Pan and Lyra have been fighting for months now. They pretty much hate each other. And it was the worst thing to read about. Also because it didn't feel like them at all. Ugh. Annoying.

But I did enjoy reading from Pan's point of view. Though both he and Lyra were being silly about why they were fighting. Hmph. Then there was also Malcolm. He was eleven in La Belle Sauvage, and he is now a huge man aged thirty one. I loved him in the first book. I hated him in this one. I could not help it. There was also a little about Alice, which I did enjoy. Except that we now learn that she was in fact raped in the first book. And I just. It was not clear when it happened. I feel so angry and hurt and oh. It was the worst.

But then there was Malcolm. And the reason for why I felt such hate towards him. Turns out he is in love with Lyra. He is eleven years older than her. This was gross, because of how he mentions thinking about her when he was her teacher, and she was fourteen or sixteen years old. He says she smelled like warm young girl. What the hell. It was so super gross. It is mentioned all the time how he loves her. But. Why? Why does he love her? He doesn't know Lyra. They aren't friends. They don't spend time together at all.

Until this book. When Lyra is suddenly told that Malcolm saved her when she was a baby. She was first thinking of how awkward it was to be around Malcolm, that they didn't go along together. But now learning that he saved her she is suddenly seeing him differently. Just. How? It makes zero sense. She only sees him that one time, then they are parted. They write letters. She thinks of him often. It was beyond gross. Where were her thoughts about Will, her actual true love? Malcolm and Lyra does not fit together. Yuck.

And then there was the fact of Lyra being unfaithful to Will. Yeah. That happened too. What even. The whole of The Amber Spyglass was about Lyra and Will falling in love, the most in love anyone had ever felt. It was perfection. And she couldn't even stay faithful to his memory for eight years? It makes zero sense. This was so not the Lyra I knew and loved. The Lyra in this book was different and I hated her at times. Which also completely ruins my heart. This book was supposed to be perfect. It was so much not.

Anyway. Turns out that Lyra had a relationship with a boy named Dick. Ha. Yeah. They parted as friends. And now every time she sees him she kisses him. I hope it's on the cheek, but did not seem like it. She thinks about how they had slept together. How she liked his touch on her. Gross. And at the same time she says this was not being unfaithful to Will. Because they didn't say i love you. What the hell. Sleeping with someone else while you claim to love another is beyond not okay. I am furious. And so heartbroken.

I don't give a damn that Will and Lyra have not been together for eight years now. Will is her soul mate. She mentions one time that she think of him every hour. She still feels the same type of love for him. And just. What. You do not feel that kind of love for someone and then go sleep with someone else, and kiss someone else and flirt with every boy you see. It's completely wrong and beyond gross and so very much not okay. If Will and Lyra ever see each other again, well. I'm not even sure how I would feel about it now.

Oh, yeah. There was no Will in this book. No mention of them ever being able to see each other again. Which I thought was the whole point of writing another book about Lyra. She barely thinks of him. Near the end, when she is all alone, she thinks of everyone she wishes was there. Will is not one of those. But Malcolm is, and her thought lingers on him. It was gross. They spent barely an hour together, and now it is like they are meant to be together forever. Nothing has happened between them yet. But I'm sure it will.

And it is pissing me off beyond words. There are so many hints in this book about Lyra and Malcolm. That makes it seem like they are meant to be. He loves her. It was goddamn horrible to read about and I hated every single second of it. They are not meant to be. Not at all. And to even think that is wrong. I hate how Philip have written this. I hate hate hate it. But I'll still hope book three will change everything. There are other hints as well. But I do not have a lot of hope, to be honest. This book ruined my heart. In a bad way.

Then there was how much Lyra had changed as a person. She had no imagination. Which Pan goes on about a lot. And when Pan leaves her early in the book, she travels to look for him. And she seemed so pathetic. She was always thinking about how alone she was. How sad she was. She was scared all the time. She was whiny and not brave. She was not the same as the girl I loved. Not even a little bit. And that is why I disliked it so. No hint of the old Lyra, almost nothing. She was so weak. My Lyra is not weak.

Then there was the fact that everywhere she went men stared at her body. She mentions it several times. She mentions how she flirts with boys often. It was simply weird. And then near the end of this book she was almost raped. It was brutal to read about. And there was no reason for this scene to be included. The book was brutal enough. Adding this almost rape did not help. And it made my dislike for this book even higher. Lyra was all alone during that too. She only escaped because of someone opening a door. Hmph.

Which makes me think of something another person said about the book. That Lyra did nothing in it. That everyone did everything for her. And I noticed this too. She has help with every single thing. She does not do anything on her own. And all she does do in this book is travel, to look for Pan in Asia. All the travelling was interesting to read about, but I did not want this book to be about travel. It was so boring most of the time. Lyra had such a boring part in this book. I wanted and was expecting way more from the book. Sigh.

Then there was a whole bunch of other point of views. This book focus even more on political things. With the Church and those who are in charge. New people looking for Lyra, wanting her dead. Most of it was all kinds of boring and lasted for ages. But yeah. I was interested in the whole book. It was, after all, this world that I completely loves. But it was too different. There was no magic. There was no fantasy. There was no Will. And there wasn't even Lyra and Pan together. This whole book was mostly depressing. Ugh.

I wanted so much more. All I got were things to remember and be angry and sad and heartbroken about. Which hurts my heart so badly. Sigh. I wanted more from The Secret Commonwealth. It was a book that took me ages to read. As I did not want to read it. I did not want to start hating Lyra and Malcolm. But that is what this book did to me. It made me slowly start hating both of them. And I will never in a million years ship them together. It is gross and beyond wrong. Lyra only ever belongs with Will. Ugh. So beyond sad.

I was worried that I would not be able to write this review of mine. I was worried I would forget to mention things. Okay, I'm certain there must be things I have forgotten, ha. But I have written down the important things. And this review is now much longer than it was going to be. But once I began writing I could not stop. Not for a single moment. I had to get it all down. Sigh. I wish this book had been better. I wish I had loved it. But it was impossible. Too much to dislike. Oh, how I hope Philip fixes it all in book three. Please.

Goodreads - The Book Depository - Amazon
All of my Philip Pullman posts sorted by date
Posted by Carina Olsen at 7:53 PM