I'm beyond excited to be taking part in the blog tour for Two Dark Reigns by Kendare Blake today :D I love Kendare beyond words. Her books are all so so very good and perfect. And this series of hers just kills me with how good it is. I read Two Dark Reigns two days ago, and it was perfection. Today I will be sharing my five star review of it, and a tour-wide international giveaway too. Huge thank you to Jean at JeanBookNerd for letting me take part in this tour. <3 I love this series so very much. If you still haven't read Three Dark Crowns and One Dark Throne and Queens of Fennbirn and Two Dark Reigns then you are seriously missing out. Such a stunning world. Such amazing characters. You need them in your life.

There is so much I wish to say about this book that I have no idea where to begin. My love for this world and these characters have no ending. I'm so thrilled there is four books in this series, that there is still one more after this one. Though I'm also not sure how I'll survive waiting another year to know what happens next to everyone. Two Dark Reigns had a pretty dark ending. And I loved every moment of it. But yeah, I very much need a happy ending for these most precious girls. I worry I will not get that. But I have hope.

I'm giving this amazing third book five stars. Because I loved every moment of it. I only wish it had been even longer, because I did not want it to end. I have so much that I wish to share about this book, though, and shall try my best to do that without that many spoilers. But even though I loved every moment of this book, there were a few things that bothered me, with the characters. Will share all about it. It was not bad, though, and I did not hate a single thing. I'm so thrilled about that. Once again, the writing was perfection.

Two Dark Reigns start a little after the ending of One Dark Throne. With Katharine as the queen crowned. With Arsinoe and Mirabella having gone to the mainland. With Jules having stayed with the warriors. To be honest, this third book was a whole lot slower than the first two. There is not a whole lot of action. Not all that much going on. But I wouldn't have had it any other way. I so loved that it was slow. I loved that it focused more on the characters and everything going on with them. It was all written so so very perfectly.

There is much that I could share about this book. But I shall mostly just share my feelings a little about everything. Well, mostly everything. This book was all kinds of perfect. I loved reading about Katharine, how she is now queen of Fennbirn. It is not going all that well, as things are happening around the island that gets blamed on her. And I missed Natalia. A whole bunch. There are so many Pietyr and Katharine scenes that my heart is bursting. Their romance and friendship is the very best. Eee. Love them so much.

There is a lot going on with Katharine, though. She is not fully herself. With her head full of dead queens. And they make her do things. And it broke my heart a little. But Pietyr is there for her, always, and I loved that so. But Katharine has such a heartbreaking story, to be honest. She does not have anyone besides Pietyr. But then Luca and Bree arrives with her, and I wanted them to love her so badly, and ahh. I want Katharine to have friends. To be loved. To be cared for. I think that it might happen. I hope so. I wish so.

Arsinoe and Mirabella is at the mainland for some weeks. They are living with Billy and his mother and his sister, which I loved. I loved that Billy was there for them. The romance between Billy and Arsinoe was so great in this book. Eee. But I do wish all this romance had more kissing scenes. Hmph. Although Arsinoe and Mirabella are happy to be safely away from the island, they are not doing all that well either. Arsinoe starts having some weird dreams about a past queen, which is basically telling her to go back home. Ack.

Then there was Jules. I loved this girl the very most in the previous books. In this one, I was pretty unsure about her. Which hurts my heart. She just lost Joseph. And while she has some thoughts about him, there was not that many, and that hurt my heart too. She is with the warriors, learning more about her war gift. And making new friends too. I did not really like Emilia at all. Ack. I wanted to, but she was difficult to like. Hmph. They are trying to make Jules into a queen. Getting rid of Katharine. I did not approve of this plan.

There is so much going on in this book. While it is slow, and does not have many action scenes, there is still tons happening. And I shall not share more about it. Just that I loved everything that went on. Though there were a few deaths that were a bit bad. Ack. But written so good. But gosh, that ending. I'm worried. I do not see a happy ending at all. But I want it so. I cannot wait to read what happens next. I simply love these characters so very much. Especially Katharine and Pietyr, eee. They are the cutest. Ship them so.

Even though this book was slow and mostly about the characters, I could not stop reading for a moment. It was everything I wanted it to be. I loved learning more about all of them. Katharine is my favorite. Then Arsinoe. And now Mirabella too. Jules used to be my favorite, ack, but in this one I liked her least. Which breaks my heart a little. I hope I will go back to loving her tons in book four, though I worry. I just did not support the cause around her. At all. Hmph. But I still love her and Camden. So much. Just not the same.

The thing that bothered me in this book was how the other queens were treating Katharine. I suppose I get why they hate her. Probably. But she has always been my favorite, and I so loved her to pieces in this one, and it breaks my heart that both Arsinoe and Mirabella has such bad thoughts about her. Want them to support her, to learn to love her too, like I love her. Mostly I just want a happy ending for them all. I am not sure I will get that. But I want it, more than anything. I want everyone to love Katharine like I love her.

Two Dark Reigns was everything that I could have wished for and more. It did not have all the heartbreak that I feared, though that is probably still to come in the fourth book, haha. But it did have a killer ending, which I will not soon forget. This book was filled with amazing characters and getting to know them all so much more. And more details about this stunning world and why the island is a certain way. Still so much more to learn, though. I can't wait to read and love the final book in this series, out next year. So excited. 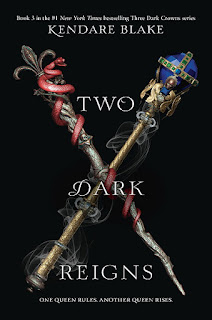 #1 New York Times bestselling author Kendare Blake returns with the highly anticipated third book in the Three Dark Crowns series! And while Arsinoe, Mirabella, and Katharine all have their own scores to settle, they aren’t the only queens stirring things up on Fennbirn Island.

Queen Katharine has waited her entire life to wear the crown. But now that she finally has it, the murmurs of dissent grow louder by the day. There’s also the alarming issue of whether or not her sisters are actually dead—or if they’re waiting in the wings to usurp the throne.

Mirabella and Arsinoe are alive, but in hiding on the minland and dealing with a nightmare of their own: being visited repeatedly by a specter they think might be the fabled Blue Queen. Though she says nothing, her rotting, bony finger pointing out to sea is clear enough: return to Fennbirn.

Jules, too, is in a strange place—in disguise. And her only confidants, a war-gifted girl named Emilia and her oracle friend Mathilde, are urging her to take on a role she can’t imagine filling: a legion-cursed queen who will lead a rebel army to Katharine’s doorstep.

This is an uprising that the mysterious Blue Queen may have more to do with than anyone could have guessed—or expected. 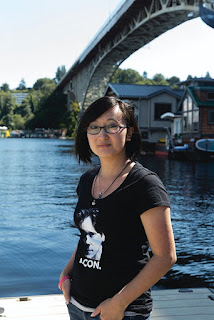 Kendare Blake is the author of several novels and short stories, most of which you can find information about via the links above. Her work is sort of dark, always violent, and features passages describing food from when she writes while hungry. She was born in July (for those of you doing book reports) in Seoul, South Korea, but doesn’t speak a lick of Korean, as she was packed off at a very early age to her adoptive parents in the United States. That might be just an excuse, though, as she is pretty bad at learning foreign languages. She enjoys the work of Milan Kundera, Caitlin R Kiernan, Bret Easton Ellis, Richard Linklater, and the late, great Michael Jackson, I mean, come on, he gave us Thriller.

Giveaway Rules.
International. Hosted by Jean. Must be 13+.
Prize details in the rafflecopter below.
Ends on September 25th 2018. 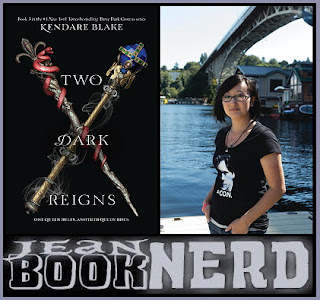 a Rafflecopter giveaway
Tour Schedule.
Posted by Carina Olsen at 9:00 AM