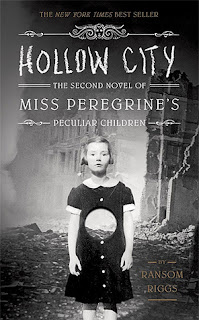 Feeling completely unsure about how to write this review of mine. Book one was not that good for me, and I had hoped this second book would be much better. In most ways, it was. But also a three star for me. I enjoyed the plot and story so much. But I disliked the main characters a bunch too. Hmm. Which was pretty depressing.

What I liked a lot about this book, though, was that it was easier to read than the first one. It was more exciting, from beginning to end. The plot was good. Silly at times, a little much, but also interesting and I enjoyed it lots. It would have been a pretty great read too, if it weren't for the characters. They ruined this book a bit for me. Sigh.

Will try my hardest to write down my thoughts and feelings about this one, though I so much dislike writing three star reviews. They are always the hardest to write. But I do have a lot I wish to share about Hollow City. Shall start with mentioning that there are once again odd images from the past included in this book. And I found all of them to great and fascinating. Another thing that I really liked about this book was the history. It takes place in London, in 1940. Right in the middle of the war. I very much liked learning more about that. There are some heartbreaking things to witness in this story, yet they weren't all that special, as I felt like it wasn't written well enough at all. Because of the character point of view of Jacob. Sigh. Felt like he ruined so much of this book. Hmph.

This book is also told from the point of view of Jacob. I so wish I could say that I finally started loving this boy. But I did not. I think I liked him even less in this second book. Which just makes me so sad. I wanted to love him, but he made it impossible. He was just so incredibly boring. It often felt like he was not even there, with how this book was written. Most of the time the writing was okay, but it was not perfect, and I couldn't help but notice all the small things that bothered me about it. Hmph. Still, it was kind of good too.

The romance. I did not get it in book one, and I got it even less in this book. Jacob and Emma just do not fit together. She was obsessed with his grandfather for years, then fell for Jacob the moment that she saw him. And he fell for her just as fast. They have known each other for days only. It makes zero sense. And the kissing scenes are still written badly. They don't really talk together either. Just, yeah. This romance is still disappointing me so much. I mean. Jacob chose to stay in the past, forever, to be with Emma. What.

A girl he had known for days. And he was willing to give up his parents and his whole life to stay in 1940 with her until he dies? Yeah. That makes no sense at all. They were not that much in love. They had only kissed a little bit. They hadn't even talked much. Still haven't. So yeah. I'm not happy with this romance at all. Sigh. Might also be because I do not like Jacob or Emma at all. Still feel like I do not know them. And what I do know I do not like. They were not completely horrible, of course, I just did not like either of them.

The other characters were awesome, though. I loved Millard a whole bunch. I loved his quiet pain about being fully invisible. Just felt like he would have been even more awesome, if not seen through the point of view of Jacob. I also really adored Bronwyn. She was pretty awesome. The other peculiar characters were great too. But they are all supposed to be over eighty years. Yet they still look like teenagers. And people always call them children. And they act like that. But they are not, and that bothered me a bunch.

There was so much going on in this book. From beginning to end. And I liked that a lot. There was never a boring moment. I may not have loved this book, and did not like everything going on, but it was never boring. And I liked learning more about this peculiar world and how they live and learning more about the loops. It was interesting. Not writing much about what happens in this book, only that they are all trying to find a way to save Miss Peregrine, whom is still a bird. It all happens in three days. A bit rushed but good.

There is more to learn about the monsters in this one. I liked that a bunch. More about Jacob's peculiar gift too, which I liked. I still do not like Jacob. At all. But I liked the way he was different than normal. Just wishing he could have been more interesting as a person too. Ugh. Hollow City was not perfect. But the plot almost was. I liked this second book a lot. Huge thank you to Penguin Random House International for letting me take part in this great read along for this series. I'm glad that I am giving these books a try.