Review: The Return of the Young Prince by A. G. Roemmers 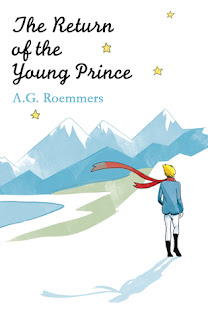 Okay. This book was bad. Like, really, truly bad. I just feel so disappointed. I had really hoped to love this one. I read The little Prince for the first time today. I didn't love it, but I liked it a little. And so I was excited about read this sequel too. But gosh. It was so awful. I'm even giving it one star. Which I don't do often. Sigh.

I'm not going to write a long review for this book either. It is longer than The Little Prince, this one being less than 160 pages. I'm just so thankful it wasn't above 200 like it says. Sigh. I had so much trouble reading this book. I wanted to quit all the time. I almost fell asleep even. Ugh. It was just so bad. Which sucks.

I wish I could say that I enjoyed some parts of this book. But I really didn't. I thought it would be a sequel to The Little Prince. And, sure, the prince is in this book. Now a teenager, having left his small planet once more. But this is not his story. At all. This is the story of the man he meets in the road, as he is telling the story. And this whole book felt like a big lecture or whatever about everything in life. It was the single most boring thing I have ever read. I read it, then I forgot it the same second. It was so awful. Ugh. I'm so upset about it, lol. I wanted it to be so much better. But it wasn't. There are a few days of road trip. All they do is talk boring stuff. So disappointed. I had a bunch of issues with the writing. Not good. And I felt nothing for the story. At all.

I guess I could write a longer review for this book. But I don't want to. I don't want to at all. Because it was pretty short, despite me feeling like I would never stop reading it. It didn't actually take me that long to read, lol. But it was the most boring thing. And I'm so disappointed in all of it. So not really mentioning the rest of the plot, because I felt like there wasn't any. Summary mentions that there would be parts of the prince's stories. Not true. He talks for a couple of pages in this one. That's it. Ugh. Wanted more of him.

I feel badly about it, but I wouldn't recommend that anyone read this book. I just found it to be so bad. I mean, sure, some could enjoy it. But I don't understand why at all. Sigh. I just feel so disappointed. I really had wanted to love it. One plus side, it looks gorgeous. Shrugs. But that's it. Anyway. Huge thank you to Cailin at Oneworld Publications for sending me this gorgeous book to read. I'm sorry I ended up disliking it so much, lol. It means the most that I got the chance to read it. Though I'm never re-reading it.

Goodreads - The Book Depository - Amazon
Posted by Carina Olsen at 12:33 AM