I'm so excited to take part in this blog tour today :) My post is the final one of the tour. And I'm having an awesome guest post by the author :) I love it. I haven't read this book yet, but I'm hoping to do it one day. It looks so awesome. I love that cover. Plus it sounds pretty exciting too. You should all get this one :) Thank you so much to Josh at Random House Children's Books for letting me take part in this awesome blog tour. The blog tour has been going on for all of August, you should see the full schedule for it here :D

A Little Bit of Scary
By David Neilsen

My debut novel, Dr. Fell and the Playhouse of Doom, is a Middle Grade horror/comedy/adventure featuring three kids who must deal with an enigmatic stranger and, in doing so, find themselves drawn into a dark place they may or may not be ready to experience. I very purposefully worked to make it creepy and dark (while still allowing for some humor), writing it in many ways for those kids ready to--as I say in the dedication--peer into the darkness.

I was not one of those kids.

Growing up, horror was the last thing I was interested in. I had no desire to be scared. Ever. I remember one Halloween when I was maybe 11 or 12. The big sister of a neighborhood friend put together a ‘haunted house’ and all the kids went in. I didn’t want to, told anyone who would listen that I didn’t want to, and ended up in line anyway because all of my friends were in line and because the girl (who was one of my babysitters) promised it wasn’t so bad. When it was my turn, she opened the front door and led me down into the dark basement, talking about the dead bodies she’d found and asking me to stick out my hand to touch the brains or guts or whatever.

I screamed holy terror and wouldn’t stop screaming until she turned on the lights and showed me the bowls of noodles (intestines), wet sponges (brains), chilled grapes (eyeballs), and all the other various grocery items she’d gathered up for her show. Didn’t help. Even with the lights on and a bowl of limp spaghetti staring at me in the face, I continued screaming.

When I got into high school, horror movies were all the rage. Specifically the slasher flicks. Nightmare on Elm Street. Friday the 13th. Halloween sequels. Child’s Play. All my friends went to see them without me. They gave up asking me to join them after the first or second attempt. Even my girlfriend would go see one with our friends and we’d meet up later. Nothing could get me to see those movies. I did not want to be scared.

But something odd started happening as all my friends saw Freddy and Jason and Michael and Chucky and Pinhead do their dirty work. After the films, they’d talk about what they’d seen. I would try to tune them out as they described Freddy performing various cruelties, but every now and then they’d mention something about where Freddy came from. The story behind the horror. The mythologies of the films.

I got intrigued. I still wasn’t going to see the movies, but I wanted my friends to see them and then tell me all the origin stories. The curses or myths or legends behind the nastiness. I wanted to learn about the worlds created within the films. Meanwhile I was a huge fan of science fiction and fantasy. Yes, sometimes those films had horrific elements here and there (I still have trouble watching the snake come out of the skeleton’s mouth after Indiana Jones and Marion escape from the Well of Souls), but I could always cover my eyes and ears during those parts and know that it wouldn’t stay scary for very long.

During and after college, I saw a few almost-horror or classic-horror films on video. I survived the original Halloween pretty well, made it through first Aliens and then Alien, left the room when Nightmare on Elm Street started (still haven’t seen it). But the movie that probably did more to shift my thoughts regarding horror may have been The Blair Witch Project. This was a seriously scary movie, and there was no gore. No scenes of people being opened like a can of sardines. It was just seriously scary. And it had a marvelous mythology to go along with it. Who was the Blair Witch? Where did she come from? What was the curse? What was with all those stick-figure tree men? A couple of other atmospheric horror films came along like The Sixth Sense and The Others and I found myself enjoying them quite a bit.

I’d found my niche. It turned out I didn’t mind being scared, I just didn’t want to see a lot of people killed in nasty and imaginative ways.

My writing eventually evolved along the same lines. I enjoyed coming up with creepy backstories and creating different worlds in which to play, each with their own rules. I wanted a dash of wonder to go along with my skin-crawling creepiness. This led me to Middle Grade Horror, which is where I have nestled in and made myself a home.

The skepticism of my 10-year-old self is understandable, particularly when you consider that I was a teenager in the 1980s, when horror was synonymous with “crazy people killing teenagers.” I like my horror bloodless and filled with tension. Forget the unkillable madman stalking people, give me a sinister old man, a creepy house, and a terrible secret any day. 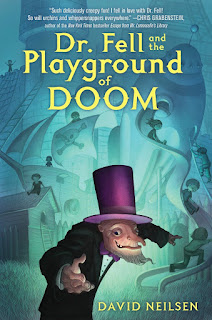 “Such deliciously creepy fun! I fell in love with Dr. Fell! So will urchins and whippersnappers everywhere.” —Chris Grabenstein, author of the New York Times bestsellers Escape from Mr. Lemoncello’s Library and The Island of Dr. Libris

When the mysterious Dr. Fell moves into the abandoned house that had once been the neighborhood kids’ hangout, he immediately builds a playground to win them over. But as the ever-changing play space becomes bigger and more elaborate, the children and their parents fall deeper under the doctor’s spell.

Only Jerry, Nancy, and Gail are immune to the lure of his extravagant wonderland. And they alone notice that when the injuries begin to pile up on the jungle gym, somehow Dr. Fell is able to heal each one with miraculous speed. Now the three children must find a way to uncover the doctor’s secret power without being captivated by his trickery. 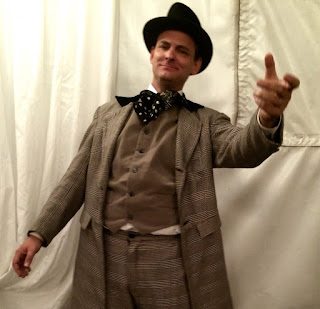 David Neilsen is the author of Dr. Fell and the Playground of Doom, and several other odd, weird, supernatural, and occasionally slightly disturbing books and stories. David is also a professionally trained actor who works as a professional storyteller up and down the Hudson River Valley and in New York City. His one-man performances based on the work of H.P. Lovecraft have sent many screaming into the hills in search of their sanity.

We hope you enjoyed the blog tour for David Nielsen’s DR. FELL AND THE PLAYGROUND OF DOOM! In case you missed part of it, you can head over to My Brain on Books to start again. Thanks for joining us!
Posted by Carina Olsen at 6:00 AM