Review: The Possibility of Somewhere by Julia Day 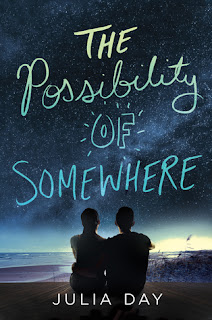 Oh, how I wish I could have loved this book. I do not have good experiences with contemporary books. But I have read a few that I loved like crazy. I had hoped to enjoy this one too. Because it do look gorgeous. And I'm taking part in the blog tour in a few weeks. But sadly, this was not for me at all. Had so many issues.

I'm giving this book two stars. I had hoped it would be higher, but, well, I'm thankful it didn't end up being a one star, lol. Which could have happened. Because, yeah, I had so many problems with this book. I liked the main character well enough. Eden was pretty sweet. I sort of liked the romance. But the rest of it sucked.

I sadly did not like the writing. It was okay for the most part, but it wasn't good at all. Which makes me so sad. I had more hopes for this one. Sigh. I felt like the whole book was telling things. I didn't get to see why Eden wanted to be with Ash. I didn't feel anything for their romance. I didn't get why Eden was friends with the new girl, as there weren't all that many scenes between them. And then there was so many time jumps. I did not get them at all. Like, Eden was going with her friend on a road trip for a week. All that was just jumped past. And then Christmas was jumped past. And the final interview for the school was jumped past. All it did was annoy me greatly. Ugh. For the most part, I did not like this. I did not hate it, though. But zero love.

I wish I could have loved this book. I really did want to. But it was simply impossible. I did like a few things, which is why I did not stop reading this book. But I did not love anything about it. Sigh. It is told from the point of view of Eden. She's taking her last year of high school. She lives in a trailer park with her step mom and her dad. They are poor. She has to pay so much for them. Ugh. Boring. She has zero friends. Then a new girl shows up, they turn instant friends. Obviously. And the boy starts seeing her too.

I just. I had so many problems with all of this. I wish I could have loved the boy. But I just did not care for Ash. Shrugs. I didn't like it when they kissed. Because it was written so badly. I didn't see their friendship at all, since it wasn't written at all. Ugh. Eden is a smart girl, smartest in her school. Which I did like. Sort of. She also babysits for this family. And I did like those two kids. Kurt has autism. It was pretty interesting to read about. But not interesting enough, sadly. About only thing I liked. A few kids that were adorable.

I think most of my issues with this book was that I felt like everything has been done before. It felt like every other contemporary book. And that just disappointed me. I'm so tired of reading about the same things. High school. Girl and boy not friends at first, then they fall in love right away when they start talking. Ugh. And they are forbidden to be together. Usual break up. Girl having issues with her father, ending up being hit by him. It is all just the same. The same boring story, and not even written well. Sigh.

I just feel like not much happened in this book at all. There are so many time jumps. And I didn't really care for Eden. Or her past. Which was boring. I didn't care for Ash either. I didn't swoon for the romance at all, though I did think it was sort of sweet. A few times. But mostly this book was boring. I wish it had been better. But I just found the writing to be so bad and I did not care about just about everything. Her dad was such an awful person. Yet he was not punished for anything. Eden just let everything go. Ugh.

Which reminds me. There is this one girl who was supposed to be the bully or whatever. She took a picture of Eden and Ash that she posted online, so that their parents found out. Boring. But she did it so that no one knew it was her. She also broke so many rules posting that picture without permission. Eden even got proof of it. But then she talked to the girl, and felt sorry for her after a second, and so she did nothing. And oh god, it bothered me. This book just made me so angry. Sigh. I didn't even like the ending.

Huge thank you to Brittani at St. Martin's Press for inviting me to take part in this blog tour, and for letting me read this book via Netgalley :) I'm sorry that I did not like it very much. But I am glad that I decided to give it a try, even so. I must say that I was pretty disappointed with The Possibility of Somewhere. I had hoped it would be more amazing. Oh, well. I did try to like it. And I do think others may enjoy it. I just did not. I think I said everything I wanted to about this book. I just couldn't come up with more things to say.