Review: A Sliver of Stardust by Marissa Burt 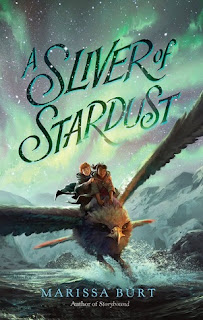 I really wanted to love this book. But it was impossible for me to do so. I had so many issues with it. And that just breaks my heart. Because I do adore this author, though I has been years since I read her first book, Storybound. I enjoyed that one. But this one was not for me at all. Sigh. But it do look so gorgeous.

I'm not sure how I will talk about this book. My mind feels empty. But I will try to talk a bit about the plot and characters. I'm giving this one two stars. I didn't like it much at all. But I also didn't hate it, so two stars it is. Because I did think it could have been amazing, as I liked a few small things a little. But most was bad.

My first issue with this book was the writing. I didn't like it at all. Felt like it wasn't done well. And so I ended up feeling nothing for the main girl, Wren. Whom is eleven years old. And super smart, and doesn't go to school. I just. I didn't think she felt very real. And the way she thought wasn't very good either, all the words that were used, yeah. I didn't think it was written well. It could have been lots better. But that might just be my opinion. I had issues with it. Shrugs. But I did like Wren. A little bit. She seemed sweet. Yet I did not get to know her much at all. Don't know what she likes to do or anything. Most of the book is just thinking about things that are happening, have happened. Not much talking with other people. Which bothered me a little.

I'm not sure why I didn't enjoy this book. I usually love middle grade books. And this one looks so pretty. But yeah. I didn't fall for the writing. I didn't connect with the main character. I didn't believe in her friendships at all, because it is never written a scene with them having fun and doing things together, like it is written that they have done, but we did not get to read it. And that bothered me. I didn't believe in the friendships between Wren and Simon and Jack at all. Those could have been awesome.

And then there was the plot. I thought the whole falcon thing could have been interesting. But it isn't focused on much at all, and it wasn't written well. Sniffs. Then there is the magic. The whole point of the book. Oh, except they don't call it magic. It is stardust. And you play it and you sing rhymes to use it. It was, well, silly. I didn't believe in it at all. And that just breaks my heart. I wish it had been done better. But it wasn't. The whole magic thing was boring and not written well at all. Sadly, did not like it.

Something in the beginning bothered me. When Wren learned about stardust, how this Mary woman told her, and then told her parents she was going to spend a whole month with her training falcons. How her parents just let her go that same day, when they didn't know this woman at all. And Wren didn't know her either. And how Wren was just dying to go with her, how she didn't mind leaving her parents for weeks, and just. Ugh. I didn't find it believable at all. Just silly and a bit annoying. Hard to read this book.

I just thought that so much of this book was silly. I do think others might enjoy it, but it was far from other great middle grade books I have read. Which is, yeah, depressing. I wanted to love this one. But it was impossible. The writing was bad. The characters were boring and without any kind of story. The plot wasn't well done. That whole house thing they spent weeks in was so boring to read about. I didn't like it at all. Felt like so many books mixed together, and not in a good way. It could have been good, though.

One thing that I did like was the falcons, as I said. They were a bit exciting. But still not perfect. I did like how Wren had these dreams. But it was obvious in the first one that she was seeing real people while she was sleeping. I mean, they called her a dreamer. Ugh. She never got it. She never told anyone, even after weeks, even after a man told her he now owned her. What the. Yeah. I guess I didn't like Wren much at all. But point is. I could have liked those dream things a lot. If Wren hadn't been so silly.

Wait. I had to edit this in after I published my review. I forgot to mention a few things. I knew the twist that would happen with one of the characters very early on, so that was a bit disappointing too. And I also never liked that character. But I feel like that person will be forgiven in the sequel, ugh, because of sad past. Seriously. So annoying. I also didn't talk about all the rhymes in this book. I. Well. I didn't like them at all. They were all so silly. And so silly to use those to magic, lol. It might just be me, though :)

And that is all I'm going to say about this book. I don't have anything else that I wish to say about it. I wish it has been better. But it wasn't. And I had such a hard time reading this book. I wanted to just stop so many times. But it was a print ARC for review, and I could not do so. So I pushed through. Sort of glad I read it, but could have done without it. Ending was a bit good, curious about next book, but I won't read it. Sadly. Huge thank you to HarperCollins International for this precious print ARC copy. <3