Oh my gosh, I'm excited for this book. It looks gorgeous. And it sounds AMAZING :D And it is Victoria. So I know it will be the very best, lol. I simply cannot wait. A bit sad, as it was supposed to come out on May 3rd, my birthday, but it has now been pushed back to June 7th. Hmph. Oh, well :D I'm not too upset about it; as I will still get to read this precious book. It's going to be oh so amazing. It sounds so good. And awesome. And exciting. And oh my gosh, I want this book so badly. It's going to be SO PERFECT. Plus side, it is a Harper book, so I think it will be up on Edelweiss sometime. <3 Fingers crossed for that. I would read it in a heartbeat, if I could. A bit sad, though, because Victoria told me there is zero romance in this one. Sniffs. But that there might be in book two. So yeah. I'm not that upset about it :D I know I will love it no matter what. Just wish I could read it right away. What do you think of the cover? 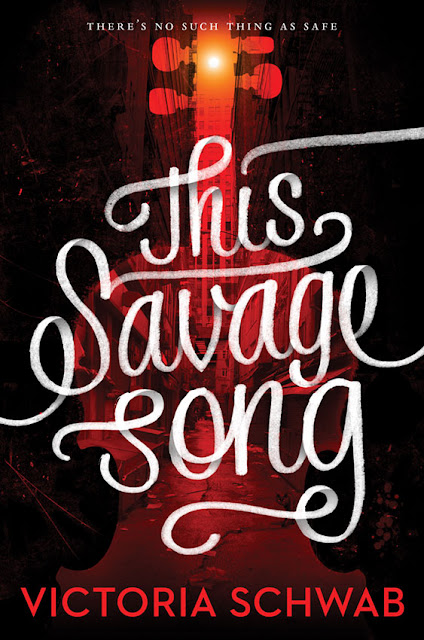 The city of Verity has been overrun with monsters, born from the worst of human evil. In North Verity, the Corsai and the Malchai run free. Under the rule of Callum Harker, the monsters kill any human who has not paid for protection. In the South, Henry Flynn hunts the monsters who cross the border into his territory, aided by the most dangerous and darkest monsters of them all—the Sunai, dark creatures who use music to steal their victim’s souls.

As one of only three Sunai in existence, August Flynn has always wanted to play a bigger role in the war between the north and the south. When the chance arises to keep an eye on Kate Harker, daughter of the leader of North Verity, August jumps on it.
When Kate discovers August’s secret, the pair find themselves running for their lives and battling monsters from both sides of the wall. As the city dissolves into chaos, it’s up to them to foster a peace between monsters and humans.

A unique, fast-paced adventure that looks at the monsters we face every day—including the monster within.