Review: The Lies About Truth by Courtney C. Stevens 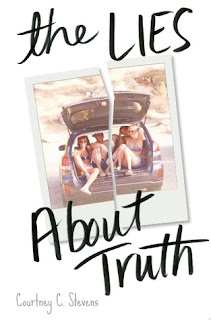 I don't know how to talk about this book. I'm not sure how I felt about it either. I was so curious about it, as I adore Courtney, as I liked her first book a lot. I had hoped to love this one. But I didn't. Even so, I enjoyed it lots. I'm giving it three stars. I liked a lot of the book, but I didn't love it, and a few things I hated.

I was about to say that the writing was good. But I must be tired, because yeah. I didn't like the writing. Which made me so depressed. Because I wanted to love it. But it annoyed me a bit. It just wasn't for me. And because of this I didn't fully enjoy the book either. Which is just sad. But even so. It wasn't fully bad.

This is the story about Sadie. How she was in a car crash a year ago, where her best friend Trent died. She ended up scarred and broken. She lost her boyfriend because of it, and her best girl friend too. She hasn't done much at all for this past year. Which was so sad, but also not sad enough for some reason. I felt like her scars didn't sound horrible or big at all, as they weren't described much, which bothered me a bit. I couldn't decide if Sadie had a reason to not want people to see her, or if she was being silly about it. But still. I did like Sadie. She seemed like a sweet girl. I just didn't love her. Her parents were pretty awesome, though. And I did like reading about them a lot. Though not perfect either. Sadie did have a good life, though.

She lost her friends, yes. But she also gained a new one. Max. The little brother of Trent, whom is the same age as Sadie, I think. I mean, they were friends, but not close friends before. They have been talking online for a year, as he hasn't been home for that long. I did like reading about their emails. But I did not like not being able to see what Max was writing to Sadie. So that bothered me. But Max was so amazing to read about. And I did like him a lot. I didn't get to know him very well, so that sucked a bit.

I'm not sure what to say about The Lies About Truth. I tried my best to love it, but it just wasn't happening. I adored Max. And how Sadie and Max connected after he came home and saw her for the first time. But this book wasn't much about their romance at all. For the most part this book was boring. I felt like nothing big ever happened. But even so I enjoyed reading it. Sadie was interesting to read about, and I liked reading about how she tried to heal from the accident. There was a lot of healing.

But then starts the things I did not like. Her ex-boyfriend, Gray. First off, he seemed like an awful person. They had been together for years. Then he cannot look at her after the accident. And then he kisses her best friend. Which Sadie later forgives, and I'm not good with this at all. I did not like this boy. Worst part. There are flashbacks to Sadie being with him. There are many where they had sex. Nothing detailed, but enough. I hated it. I hated hated hated it. Seriously. I don't want to read that.

Which is probably the biggest reason for why I did not love this book. The writing and the focus on the ex-boyfriend. It bothered me a lot. And I didn't enjoy reading about it at all. Ugh. But even so, I still give this book three stars, but right now it feels a bit low in my head. But I did enjoy reading this book. I liked Max a whole bunch. And I did enjoy the plot, for the most part. I wish Trent hadn't died, as he was the most amazing person in this book. And reading about his friendship with Sadie was the best.

This book is focused on healing. And on Sadie fixing her relationship with her friends. Which also includes secrets. The secret that Gray had was so not okay. Why wasn't there more talk about that? I did not approve at all. I would not forgive that. I really wouldn't. It was an awful secret. And then the secret that Sadie had about Trent. Seriously? That was supposed to be a big, hurtful thing to get to know? What now? I loved his secret. I didn't think it was a big deal at all; that was a bit disappointing, to be honest.

Okay. I don't have much more to say about this book. It was a bit short, and easy and fast to read, despite me not loving the writing. I was disappointed with this book, but I also liked it, and I am glad that I read it. I just wish I had been able to love it. Sad face. I do think you should all read it, though. It was a great story even though I didn't fully love it. Thank you so much to HarperCollins International for sending me this gorgeous print ARC copy. It means the most to me. You guys are seriously the best :)