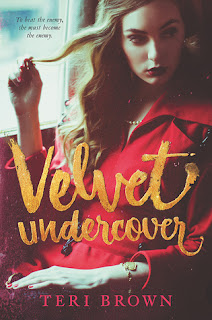 I'm so disappointed. Which is just so heartbreaking. Because I really wanted to love this book. It looks gorgeous. It sounded pretty interesting. But then I read all of it today. And it was bad. Really bad. Hurts my heart, but it is the way I felt. This was a two star for me. I have so many reasons for that. Ugh.

This book started badly for me from the very first chapter. It was so bad. Like, I haven't read such a bad chapter in a long time. Which is so sad, but it is how I felt. Writing was bad, which sucks, as I did love Born of Illusion by Teri from two years before. But this one? Oh, I did not like it. Not at all, really. Sigh.

About this first chapter. I did not like the writing. And my first impression of the main character, Samantha, was not good at all. It starts with a competition between her and two other girls. She thinks she will win. But she doesn't. And she runs to the bathroom to cry and sob and just act so badly. I didn't like being inside her head at all. Ugh. It was very painful to read about. So yeah. First impression was not good at all. And then it just went downhill from there. I'm not sure I will even be able to write about all the bad things. But I'm going to try my best. There are a bunch of characters in this book. And, sadly, I didn't like any of them at all. They were just so weird and they didn't feel natural at all. Well, the kids did; only them. Just, disappointing.

This is a book from 1915. Yet I don't think I ever felt like it was a book from the past. I felt like I never saw interesting things from the past. It was to be about World War I, but nothing bad happens at all. Nothing about the war. Just a teenage girl suddenly turning a spy, and trying to search for another spy in such a pathetic way. It wasn't good at all. Sam was a bad and boring character and I felt nothing for her. I didn't like her. But I didn't hate her either. But yeah. No good feelings for her at all, which is just sad.

I don't know how to speak about the plot in this one. It was so badly done. I couldn't stand it. I wanted to DNF this book after the first chapter. But I did not, because it was a print ARC from the publisher. So I read it. And it was such a struggle. I wouldn't have minded to stop reading it no matter when. Sam works as a messenger. Then suddenly she gets a job as a spy. She has zero training in that. None. Then she trains for a couple of weeks. Then gets sent to German. It was all so silly and didn't feel natural.

There is a bit of romance in this book. Well, more like insta-like. There isn't a single kiss. But Sam sees a guard. And she blushes just by looking at him. Wth. So weird. And then he helps her with everything after that, and he smiles and laughs at her all the time, and it did not seem natural at all. I didn't like it. And she has such weird thoughts about him. It was just awkward. I felt nothing for any of them. Small romance, but it sucked. Which breaks my heart. Ugh. Max was nothing special at all, unfortunately.

I don't know what else to say. I mean, there are so many bad things I could mention. But I'm not going to. Two stars. I didn't like the book. But I didn't hate it either, but I would not read it again. Ever. The plot is so badly done. The whole spy thing was so silly. Sam is not a good spy at all. She had such weird thoughts. She did it so badly. She kept thinking so often that she was using people. Just, what? When did she ever use anyone? She never did anything. I felt like this whole book was about.. nothing. Ugh.

I'm sorry for not saying more about this book. I suppose it could have been good. But I felt like it was so boring. This book just takes place inside a castle thingy. With Sam thinking that everyone is Velvet and doing such silly things trying to figure it out. It was so boring and not interesting. I didn't even like the one villain in this book. It made so little sense. There is one death. And I did not care at all. I expected more from this book. I wanted so much more. Like what I got from Wolf By Wolf. Sigh. Disappointed.

Thank you so, so much to Megan at HarperCollins International for sending me this print ARC for review. <3 It is all kinds of gorgeous. I'm so sorry that I sort of hated it. Breaks my heart. But still happy that I read it. And having gotten it from you guys meant the most to me. But, sadly, I will not be ordering the finished hardcover. My space is limited, and considering this was a two star, it is not a book I want to buy and own as a hardcover. Sigh. But I do think others might enjoy it. Maybe. I'm still a bit unsure :)