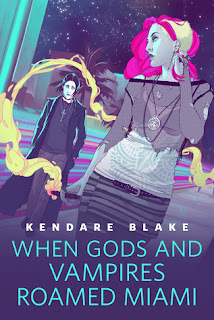 I adored this Goddess War short story. It is about Athena, whom is my favorite character in these books by Kendare. And it is set in 1991, so a while back. The writing is gorgeous. But the story is oh so short. Ack. I wish it had been much longer. But while short, it was also amazing. And I very much enjoyed it.

I'm not going to say much about the plot, since it is so short, but still going to share lots of it. Athena is alone in Miami, and she's being followed by a fifteen year old boy. He thinks she's a vampire. And he wants to be one too. His name is Lark, and he was pretty cute. But total stalker and pretty crazy too, lol.

He follows her around, and Athena enjoys it. She takes him in for a day, as he is so skinny and alone too. A runaway. She feeds him. I loved how she took care of him for a little bit. But yeah. As I said, he was a little bit crazy. Wanting her to turn him into a vampire, but she isn't one. He did so much trying to make her turn him. It was a bit funny. Yet depressing too, as he was so young. Sigh. But anyway. This story is so short. And I'm not going to say more about it. Just that the writing is gorgeous, like everything that Kendare writes. She's the best. I adored reading a bit more about Athena. I think she's an amazing person. The ending of this story was a bit sad; I loved it lots. You really should read this story. It's interesting and exciting :)