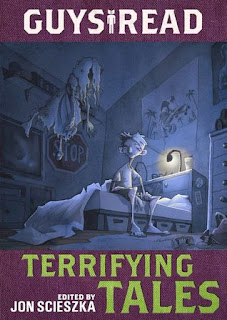 I confess; I only got this book because of the story by Claire Legrand. Whom I adore like crazy. Her books are always amazing. Her story is the last one in this book. Yet I did not read it first. I was good and read the other stories first, lol. Which was, well, disappointing. I have so so many thoughts.

I'm not sure where to begin. I'm giving this book three stars. There are ten different stories by different authors inside. All middle grade. All supposed to be scary. But the only story that made me feel scared was the last one. It was the only one that I truly loved and enjoyed. But I did like the other stories.

I have different feelings about all of them. So I'm going to try to rate them all, and to say a little bit about each story. But yeah. First I wish to say that all the stories could have been so much better. I have read great scary middle grade books. All by Claire Legrand. They are amazing. Yet these stories in this one were, well, badly written and a bit tame. Sure, most don't have happy endings, but I felt like the stories were a bit boring. I do think many people would enjoy all the stories. But I did not. Cause I have read much better middle grade stories. And these were, sadly, not good enough. But even so. I liked many of them a lot. And I loved the one by Claire. The last one. It was perfection. Sigh. I'm just so sad it wasn't longer, lol.

The first story was Mr. Shocky by Michael Buckley. I'm giving this story 2 out of 5. It could have been pretty interesting, it was about an imaginary friend, which was dangerous. But the writing was so bad. And the story ended up being so silly. And the ending. Ugh. So disappointing. Not for me. The second story was Licorice Needles by Nikki Loftin. I'm giving this story 3 out of 5. It was much more exciting, yet never good enough. But it was creepy. Bad things happened. And the ending was cruel. I loved that.

The third story was The Blue-Bearded Bird-Man by Adam Gidwitz. I'm giving this story 3 out of 5. It was interesting, and I liked it, but I didn't love it. Some brutal murders, which I loved. But it was a bit too silly too. Yet a good story. The fourth story was Don't Eat the Baby by Kelly Barnhill. I'm giving this story 3 out of 5. I loved another book by Kelly. And I enjoyed this story too, but I didn't love it. The ending was good, but story was a bit weird. I liked it a lot. But felt like the sort of creepy thing ate too much stuff.

The fifth story was My Ghost Story by Dav Pilkey. I'm giving this story 2 out of 5. It wasn't all bad, sort of a cute comic story. But it wasn't good either. Not creepy at all. Could have been much better. The sixth story was Marcos at the River by Daniel José Older. I'm giving this story 4 out of 5. First one that I truly liked a lot. But it was way too short, sadly. But it was good. And sad. And I liked it a whole bunch. There are spirits. And a poor boy who saw his father die. Yeah. I'm happy I liked this. Wish it had been longer.

The seventh story was Coconut Heads by Rita Williams-Garcia. I'm giving this story 3 out of 5. I'm not sure I liked it much at all. The boy was sort of cute. But it ended so weird. And the mom, what was she? Could have been much better, I think. The eight story was Manifest by Adele Griffin and Lisa Brown. I'm giving this story 3 out of 5. I thought it was very interesting. With a boy at sea. But first he murdered another boy, and stole his ticket. I still don't understand what he was. But I liked it. Ending was good.

The ninth story was Disappear! by R.L. Stine. I'm giving this story 3 out of 5. It was about magic tricks. And I sort of liked it a lot, but it was not perfect at all. Ending was weird, sigh. But happy too. The tenth and final story was The Mandigore by Claire Legrand. I'm giving this story 5 out of 5. The one story that I really truly loved a whole lot. Sigh. I will need to talk much more about this one. I'm so thrilled to say that I loved it. Was a bit nervous, but I shouldn't have been. Since it is Claire. Whom is so awesome.

And, yes. This story was aamazing. It was about twelve year old Clark and Nina. Whom are best friends. And they both love this show. And that show sounded awesome. And ugh, I adored these kids. But it was too short. And too awesome. And so creepy. This story was awesome. I loved it. Clark has a grandma whom sings songs. She's a bit crazy. But she sings about The Mandigore. And it is so creepy. And oh, this story. Loved it. But that ending! I cannot. Cliffhanger. No more after. I need to know. It was so mean.

Anyway. I'm glad I bought this short story collection book. I was disappointed with most of the stories, but I loved the story by Claire, which was the one I was most excited about. I think others would enjoy this one too. But yeah. It was not perfect. But the last story was. Sigh. So good. Anyway. Thank you so much to HarperTeen on Edelweiss for the auto approval. <3 I'm sorry I didn't read this sooner. Decided to wait for my final copy with all the illustrations. And oh! Those were gorgeous. I loved every one of them.