Review: The Accidental Afterlife of Thomas Marsden by Emma Trevayne 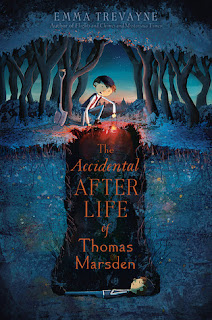 I have wanted to read this book ever since I saw that precious cover. And yet it still took me weeks after it published until I read it. But now I have. I did like it a lot. But it was different from what I thought it would be. Giving it three stars. There was nothing I hated about it, but I still didn't fully love the book.

I don't know where to begin. I'm not really sure what I had imagined this book to be about. Maybe, you know, that Thomas was actually dead, considering he found his body in a grave. Yet that is not the plot at all. Instead it is about faeries. And the body was sort of the twin of Thomas. It was a bit confusing.

But even though this book wasn't what I thought it would be, I still ended up liking it a lot. I enjoyed the writing, though it was a bit different too, and a bit weird. But I liked it. And I thought the main character, twelve year old Thomas, was all kinds of awesome. I adored him. And I felt so sorry for him at times too. He lives with his mom and dad. They are very poor. And he and his dad rob graves to afford food. It was depressing. Yet pretty awesome to read about too. And interesting. Yet this book is pretty short, so I felt like it didn't focus enough on Thomas and his life. I would have liked more of that. But anyway. I did like his parents a lot. Wish they had been there more about them. Thomas has a best friend, Charley. I liked him a lot too.

There were some things about this book that I didn't like. I wish it had been more about Thomas, as I was expecting a book about him. Sigh. But instead it focused on the faeries. And I did like that, I did. I just. I loved Thomas. And I wanted more of him. That was disappointing. But I also enjoyed the faerie chapters. I did end up liking Deadnettle. And Marigold. She was pretty great, though I didn't get to know her nearly well enough. Hmph. But anyway. There were some pretty awesome characters in this book.

I did like the faerie parts of the book. I just didn't love it. But my heart was breaking for the faeries. They had been taken from their home so many years ago. More than one hundred and fifty of them had died already, because of the iron and the pain. They are held captive. And used. It was heartbreaking. Yet I felt like I could have gotten to know much more about it. Would have loved it then. Oh, well. It was interesting and I liked reading about it all. But I wanted more. Still, I liked Marigold a lot. And Thomas.

There is a villain in this book. The one who has captured the faeries. But I just. I don't get the big finale with him. It was just silly. And felt so rushed. I wanted much more from that. He was so awful earlier. And his ending was so tame and lame, lol. But still. I did find the whole book interesting and I did like it. I just wish it had been a bit more. Was a bit disappointed. But still glad I read it. Thomas was a great character. I just wanted to get to know him much more. And oh, I wanted a much longer ending. Ack.

I don't really know what else to say about this book. So I will not say much more at all. It is about faeries. And about London, ages back, I think. There is some magic. Some great characters. A few heartbreaking scenes. I was a bit disappointed, yet I liked this book a lot too. The plot was pretty exciting and interesting. I loved reading the scenes after Thomas had gotten some money. I loved how he spent it, how happy it made him. But I hated that he left his family behind for a bit. Hmph. Not okay.

I do own another middle grade book by Emma, called Flights and Chimes and Mysterious Times. Which I'm excited to read as well sometime soonish. It do look so cute. And while I didn't love this first book by her, I did enjoy it, and I am curious about her other books. Her middle grade books looks so pretty. Sigh. I adore pretty artwork. Anyway. I'm glad I decided to finally read this one. It was good. I didn't love it, but I liked it lots. And I think many others would enjoy it too. So yes. I would suggest that you read it.