Cover Reveal: A Gathering of Shadows by V. E. Schwab

This book. I am dying to read this book. I read A Darker Shade of Magic just two weeks ago, and I loved it so damn much. It was so exciting and different and oh so good. I think this sequel sounds all kinds of perfect. The summary is goooorgeous. But I am so worried too. I hope that Kell and Lila will end up together. Because they are both perfect. And I ship them so badly. Ack. Just worried there might be a triangle coming. I think not, but you never know. Either way, I do know that I will love this sequel :D And oh my gosh. These covers! It is the US cover. And the UK cover. And they are both perfection. Oh so gorgeous. I love them both! And Lila is on both :D I love her so much. Sniffs. Yeah. These covers are awesome. I cannot wait to own them both. <3 Also, Victoria is all kinds of awesome. You should all go follow her. And read her books if you haven't yet. <3 There isn't possible to pre-order this book yet, but adding links below to where they will show up, sometime :) Just, oh. I cannot wait for A Gathering of Shadows. Wishing it was out sooner than February 23rd 2016. The wait is going to be torture. Ack! But, thankfully, the book will be over five hundred pages, and that is well worth the wait, I think :D It shall be all kinds of epic. And I am dying to read this book. So much. <3 What do you think of these two covers? 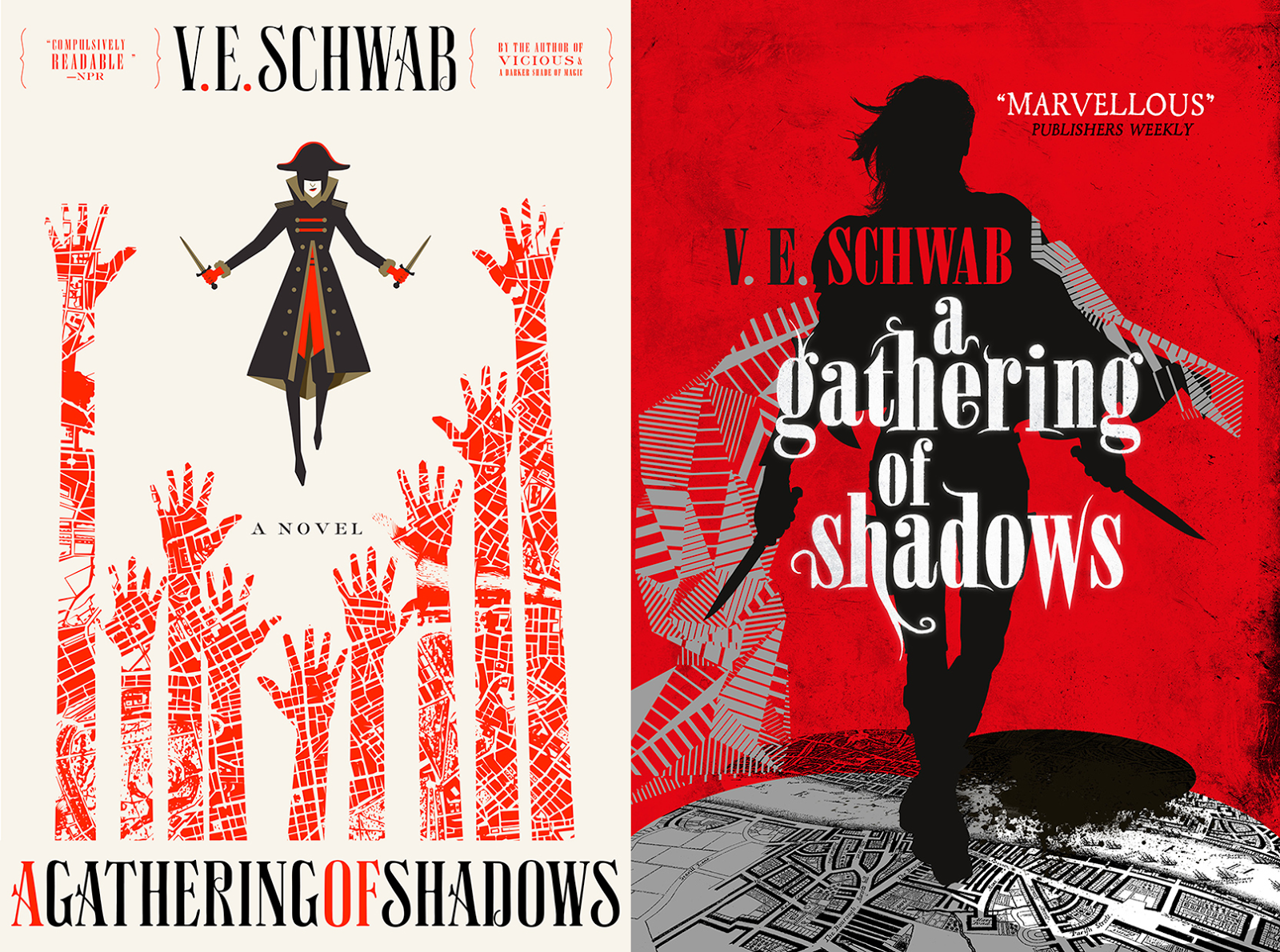 Four months have passed since the shadow stone fell into Kell’s possession. Four months since his path crossed with Delilah Bard. Four months since Rhy was wounded and the Dane twins fell, and the stone was cast with Holland’s dying body through the rift, and into Black London.

In many ways, things have almost returned to normal, though Rhy is more sober, and Kell is now plagued by his guilt. Restless, and having given up smuggling, Kell is visited by dreams of ominous magical events, waking only to think of Lila, who disappeared from the docks like she always meant to do. As Red London finalizes preparations for the Element Games—an extravagant international competition of magic, meant to entertain and keep healthy the ties between neighboring countries—a certain pirate ship draws closer, carrying old friends back into port.

But while Red London is caught up in the pageantry and thrills of the Games, another London is coming back to life, and those who were thought to be forever gone have returned. After all, a shadow that was gone in the night reappears in the morning, and so it seems Black London has risen again—meaning that another London must fall.