Review: The Other Life by Susanne Winnacker 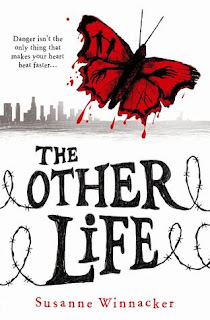 I don't know how to write my feelings for this book. I wanted it to be amazing, and in a way it was. But it also wasn't. I didn't like the writing, and I didn't really feel anything for the characters.

The book starts sort of good. It starts off in a bunker, with a family. To me, it just didn't seem realistic that they stayed down there for over three years. I never would have been able to stand it. But then, I guess they thought they didn't have any other choice. Which they didn't. Sort of.

The main character, Sherry, I didn't really like. To start with, she is 15. She was 12 when they got down in the bunker. And she keeps acting like she is so much older, which does NOT make sense. Because I don't see how she can have learned anything at all in those three years locked up in a small space. And yet, it seems like she knows so much.

It would have made more sense to me if she was older. At least a couple of years older. But that isn't really why I didn't like her. I just didn't like the way it all is written. I seem to have huge issues with writing these days, and I just could not get into this book. None of it seemed real, and I did not like the way Sherry thought. She seemed way too dramatic, and she kept cursing a few times in her head, which did not suit her at all, and didn't really make sense. I mean, I would have used those words, but I don't think she would. Especially not when later on another one cursed, and she just thought that "he cussed."

Also, didn't think it made sense the few pages where we got to see back to her past. Because those scenes didn't fit in with rest of the story.. and there was just too little of it. Also, the love interest, Joshua, could have been such an amazing character. But I didn't really feel anything for him with how Sherry thought :\

Sorry if I seem to be just negative (A) The book isn't really that bad. It's just me having trouble reading it. I did like the plot, it is a very interesting story. And even though I didn't really like this book, I'm still going to read the sequel; since I am really interested to see what happens next :)

What made my buy this book was the summary and the pretty cover. Although, I didn't notice the boy and girl and the claws in the butterfly until I held the book myself (A) But those things made the cover even prettier :) Don't like the US edition, though :p Hih.

Anyway, if you don't have any trouble with the writing, then I do think you will love this book :) It is a book that you should read.