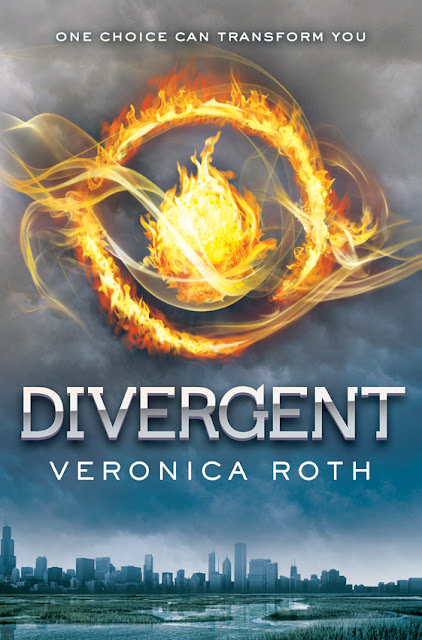 I just finished reading Divergent for the fifth time, I think. But it's been months now since I last read it, so I figured it was about time I read it again :) Missed Four so much. And the whole story.

Divergent is an amazing book, it has amazing characters and an awesome plot. And it has good writing. Which is a huge plus. Divergent became my favorite book when I first read it last May, and it still is my most favorite book. It is the one I love the most. And Four is still my favorite boy. <3

I don't know how to explain this book. I do not want to say too much about it, because I want you to figure it all out for yourself the first time you read it. But I am going to say some things. Non-spoilery, though :)

Divergent has an amazing plot line, which seems to have been given a lot of thought to. Everything seems real to me, and very believeable. I don't see how it's possible to read this book and not fall in love with this book. I love everything about it. I love the factions, although I would only want to be a Dauntless, myself :)

The factions are all very amazing, but the one that stood out the most to me was Dauntless. Probably because we spent most of the time there in the book. But even so, I still think it's the one who I would like the most :) Even though I'm not a huge fan of the initiations. But, I still loved reading everything about it.

This book is so amazing, but it is also heartbreaking at times. A lot of bad stuff happens to Tris, some things I really, really did not like in the middle. But I also loved it, if that makes sense. It made the story better. Although the heartbreak near the end is a bit too much for me, I'm also glad it happened. But it makes me wonder how much it will hurt on book two..

Tris is an amazing character. I love that we got to hear this story from her POV. Also love that it will still be her POV in the next books, as well :) Although it would have been awesome with scenes from Four's POV as well :D Hopefully some outtakes ;) Back to Tris though. She is strong. And kind. And Selfless. And brave. But also selfish. But I love that. She is just really amazing.

As is Four. He is, as usual, the character I fell in love with the most. He is strong, tough, kind, not all the time though, but he always does what's best. The best part though, is that he is broken. I LOVE that in a book. I crave a broken boy. And Four does not disappoint there at all. He is as broken as it gets. Sort of. And I kind of hope we get to learn more about that in Insurgent :)

There is many other amazing characters in this book as well, but I didn't really like Tris's friends. They all seemed so fake, which most of them were. Well, except for Uriah, and a couple of others. I also didn't like her brother, Caleb, much. Didn't like that Tris never had a clue about who he really was. But, I'm hoping he makes up for that in the next books :)

And oh, the bad guys in this book are bad. Really bad. Like Marcus. HATES him so much. And Eric. He is pure evil. As is Jeanine. Kind of excited to know what will happen next with them all ;)

This book has, as I said, amazing characters and amazing plot. It has a lot of action, a lot of romance, and it is never ever boring. Something always happens. And I loved it all. What I loved the most though, was the romance between Four and Tris. It is sweet, it is amazing. It is love. And oh, that is what I am most excited about in Insurgent; the love between Four and Tris :) Needs more. Lots more.

If you have not read Divergent yet, then you better do so right NOW! Because you will not regret it. I promise. I am now going to share some quotes from Divergent that I loved very much; some might have spoilers though, so beware ;)

He gives me a conflicted look and touches his lips to my forehead, right between my eyebrows.
I close my eyes. I don't understand this, whatever it is. But I don't want to ruin it, so I say nothing.
He doesn't move; he just stays there with his mouth pressed to my skin, and I stay there with my
hands on his waist, for a long time. ~ page 315

My old review of Divergent. My biggest wish. Goodreads. Buy it. Veronica Roth.

Update: Newer and better review of the book can be found here.
Posted by Carina Olsen at 8:59 PM