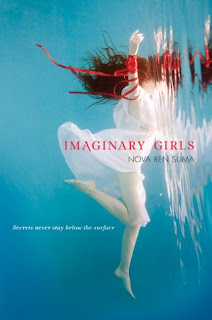 I'm feeling very undecided about this book. I should be giving it a five star, but because of some personal preferences I'm only giving it four (A) Which I will tell you all about longer down, but it is spoilery :) When I first saw the cover of this book I knew I had to have it. I was unsure if I would like it, since it didn't mention any romance, but I knew I needed it.

Then I picked it up yesterday, and oh, I'm glad I did. It is an amazing book. It is good written, it's exciting, mysterious and it is super creepy. I think I mostly liked the characters. I really liked Ruby in the first few pages, before that thing happened.

She seemed like an amazing sister. And she kind of is, in the entire book. But, she isn't normal. And she is kind of crazy, which really creeped me out. But, she loves her sister Chloe, and I'm glad she does.

I mostly liked Chloe. She is an interesting character, a great lead character, but I didn't like that she so blindly did anything her sister said she should. Just like they all did. Everyone in town. The boys, the girls, everyone. It isn't really explained much, what Ruby can do, but I understood it just fine. And it is creepy :p

I found the plot to be really great, I loved everything about the reservoir, even though it really is creepy and all. I also mostly loved how close Chloe and Ruby was, even though I did think it was too much sometimes. But I didn't mind so much. I think.

What I did mind though, and this is very SPOILERY, so if you don't want to know, don't read ;)
I didn't like that there was no romance. I think it would have made the story even better, even if it almost perfect on it's own. Because there is a guy, Owen, and he could have been perfect for Chloe. But then, I don't know why, the author just ruined everything they could have had together. What really bothered me was that they had sex. And that was just it. Nothing more. The author just decided that was it, that there shouldn't be a love interest. And I really, really didn't like that. Wish there had been more :) But, I still liked the book. Much.

Anyway, I don't want to say too much about this book, so that I spoil you, so I'm just going to say that you should read this book :) Because it is really good. And creepy ;)