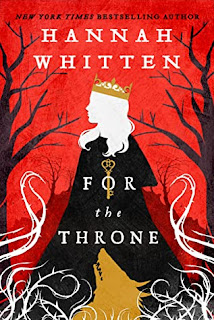 FOR THE THRONE (Wilderwood #2) BY HANNAH WHITTEN

Red and the Wolf have finally contained the threat of the Old Kings but at a steep cost. Red's beloved sister Neve, the First Daughter is lost in the Shadowlands, an inverted kingdom where the vicious gods of legend have been trapped for centuries and the Old Kings have slowly been gaining control. But Neve has an ally--though it's one she'd rather never have to speak to again--the rogue king Solmir.

Solmir wants to bring an end to the Shadowlands and he believes helping Neve may be the key to its destruction. But to do that, they will both have to journey across a dangerous landscape in order to find a mysterious Heart Tree, and finally to claim the gods' dark, twisted powers for themselves.
Paperback, UK, 448 pages
Expected publication: June 9th 2022 by Orbit
Pre-Order: Book Depository and Amazon #ad
I know, I know. I haven't read book one yet. Oops. But I am still so excited about this second one, haha :D As I do own several copies of book one. And follow the author. So I feel like I already know these books a bunch, haha. And I feel certain that I will love both of them. So I cannot wait to read them both soonish :)
What are you waiting for on this vicious Wednesday?
Posted by Carina Olsen at 6:00 AM